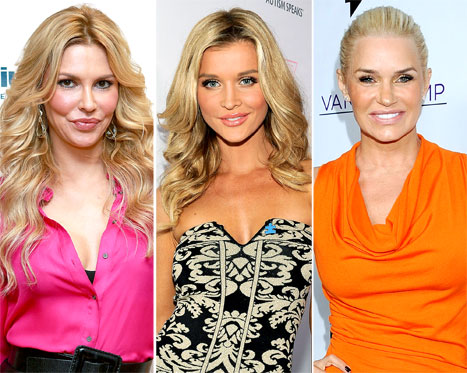 via US Magazine:
“Joanna had sex with Mohamed [while he was still married to Yolanda],” Glanville said on the show. “It was one of many affairs. It’s not the exact situation. But Mohamed and Yolanda are great now.”

During the after show, Cohen revealed that Krupa, 34, tweeted a response to Glanville’s claims. “No wonder her husband left her,” Krupa wrote, referencing Glanville’s ex-husband Eddie Cibrian’s infamous affair with LeAnn Rimes in 2009.

Glanville’s X-rated response? “Well, Mohamed did tell me that her p–sy smelled,” she said. “It’s true! I’m not lying! And Lisa Vanderpump was there when he said it. Sorry, bitch. I win!”

From there, the feud escalated even more on social media. Hadid tweeted, “Andy @andy. That a lie. I never spoken to Brandy @BrandiGlanville in any way about joanna. Brandy is She is such a scum and a foul mouth.” He also wrote a note to his ex-wife: “@YolandaHFoster. I love you mother of my children and my best friend. U know I don’t have a foul mouth and I would never use words to brandi.” (Married from 1994 to 2000, Hadid and Yolanda share kids Gigi, Bella and Anwar.)

It isn’t new gossip, that Mohammed cheated on Yolanda continuously throughout their marriage. Yolanda even admitted as such. If Mohamed was such good friends with Joanna, wouldn’t he know how to spell her name? What are your thoughts? Post your comments below.

More in Real Housewives Of Beverly Hills (461 of 795 articles)