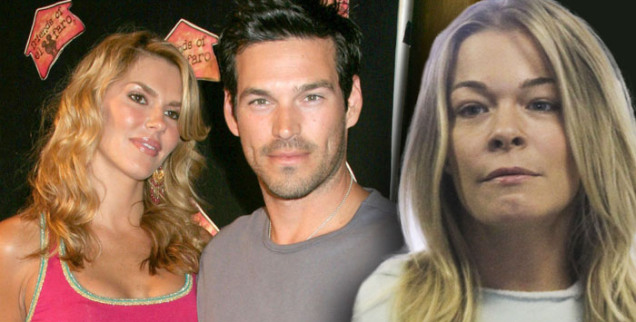 via Radar Online:
According to multiple diners who spoke to RadarOnline.com, you could have cut the tension with a knife at the upmarket beachfront eatery Nobu.

And the chance encounter was not without incident when Eddie and LeAnn crossed paths with The Real Housewives of Beverly Hills reality star, who was dining with pals and the triumvirate’s two children, Mason and Jake.

After managing to avoid each other for most of the night, the new Mr. and Mrs. Cibrian stopped by Brandi’s table on their way out of the restaurant to apparently say goodbye to the kids, who had been criss-crossing from table to table during dinner.

But instead of pleasantries being exchanged, Eddie and LeAnn were “confronted by Brandi who raised her voice and glass of wine at them,” one eyewitness told Radar.

“It was so obnoxious that other people at the restaurant turned their heads to see what all the commotion was about.”

Said the onlooker: “Brandi was holding Jake in her lap when LeAnn and Eddie walked by. It was a very awkward moment and she appeared to cause quite the scene.”

Soon after the incident, the 40-year-old took to Twitter and downplayed the confrontation.

“Just left Nobu Malibu with boys and friends, ran into boy’s dad,” Brandi wrote. “The kids love us all together so lets just stop all the BS.”

LeAnn Rimes: “Brandi Glanville Uses Our Feud For A Career & Is A Liar”

More in Real Housewives Of Beverly Hills (504 of 805 articles)

LeAnn Rimes: “Brandi Glanville Uses Our Feud For A Career & Is A Liar”