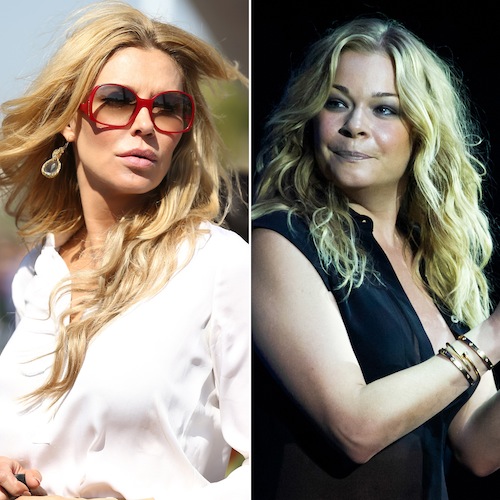 via InTouch:
Brandi Glanville and LeAnn Rimes have never been shy about their feelings for one another. But their most recent series of attacks and tweets may have taken their feud too far—by involving the Real Housewives of Beverly Hills star’s two sons.

The drama unfolded just one week before Mother’s Day, when LeAnn—who is married to Brandi’s ex-husband Eddie Cibrian—shared an article from the Huffington Post about Stepmother’s Day.

Mother’s Day vs. Stepmother’s Day: Who Owns It? http://t.co/c27wKcaU9i via @HuffPostDivorce Happy Sunday I really appreciate this article
— LeAnn Rimes Cibrian (@leannrimes) May 4, 2014

Many fans interpreted the tweet to mean LeAnn was overstepping her boundaries when it came to Brandi and Eddie’s children, Jake and Mason.  The 31-year-old singer went on to deny she was trying to replace their mother and explained how they celebrate Mother’s Day.

“Eddie celebrates it w/ me. The kids, as they should be, will always be w/ their mom. We do celebrate w/ them another day,” she explained to one fan on Twitter.

She went on to call out fans who were jumping to conclusions by saying, “Do some people only read headlines these days? There is a Stepmother’s day, let’s celebrate it….THAT’S ALL.”

Do some people only read headlines these days? There is a Stepmother’s day, let’s celebrate it….THAT’S ALL. — LeAnn Rimes Cibrian (@leannrimes) May 4, 2014

Still, some fans remained understandably suspicious about whether or not there was more to the singer’s messages—as she continually boasted about her time with Brandi’s boys.

“Oh no, sick lil one this morning,” she wrote in one seemingly passive aggressive tweet. “A bad cough is not good for baseball 🙁 I think we might hit the beach and take a stroll.”

Other tweets mentioned her plans to “make banana waffles and get these 3 cutie pies up” referring, of course, to Brandi’s ex-husband and sons. Meanwhile, Brandi didn’t exactly stay away from the drama either.

“I’m only having positive people in my life, people that get that I am 1 person and can’t always answer 500 calls a day [because] I actually HAVE to work,” she cryptically tweeted.

I’m only having positive people in my life,people that get that I am1person &cant always answer 500 calls a day cuz I actually HAVE to work
— Brandi Glanville (@BrandiGlanville) May 4, 2014

Other attacks were much more direct.

“He’s my EX – so do I really want him or am I ok with him telling me how much LUUUVS ME but is gonna chill with his “back up plan,” she wrote—after noting her plans to “drink and tweet” earlier in the day. “#nothot.”

More in Real Housewives Of Beverly Hills (373 of 790 articles)