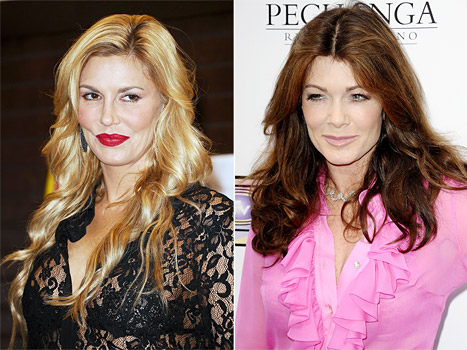 After the Season 4 finale of Real Housewives of Beverly Hills aired on Monday, March 10, Brandi Glanville appeared on Watch What Happens Live to explain her feud with former bff Lisa Vanderpump.

A viewer asked, “Why do you bite the hand that fed you so well socially?”

Brandi responded, “Who the f*ck fed me? Who?”

“No, honestly, she didn’t feed me. She was a good friend. She loaned me a dress, one time, that was her big thing. I sat down with Scheana for her multiple times to help her show. I said I will do whatever you like, and then I got tired of it. So, I think that I fed that bitch,” Brandi said of her former friend.

Part of Brandi’s never ending fight with Lisa was the fact that she kept employee Scheana Marie, her ex-husband Eddie Cibrian’s former mistress, to work in her restaurant, Sur. During the finale, Brandi confronted Lisa at a party in Beverly Hills.

“I’ve been under your spell for two years. You’re intoxicating, you’re beautiful, you’re everything that’s pretty, I want to believe everything that comes out of your mouth. The truth is I’m better off on my own.”

“Why have all the girls decided to go against Lisa this season?”

Brandi replied, “Because she’s perfect. No, I’m kidding. I don’t think all the girls decided to go against her. I think we all had separate issues with her. It felt like when one person opened that door, it felt like, okay, we can all do it, separately. It’s hard to go against her because she is so perfect.”

The three-part Season 4 reunion of Real Housewives of Beverly Hills premieres March 17. A source close to the cast allegedly told Us Magazine that Lisa is worried about how her fans will react to her appearance on the showdown with the other women.

“Lisa has been trying to spin everything in anticipation of the reunion not being good for her. She’s scared and concerned that people’s opinions of her might change. She might come out of this no longer as the queen.”

Hmm sounds fishy to me, catty and completely ridiculous. What are your thoughts? Post your comments below.

More in Real Housewives Of Beverly Hills (411 of 806 articles)