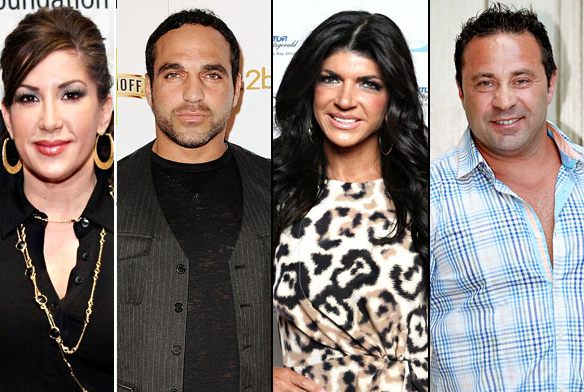 Season 5 of the Real Housewives Of New Jersey is coming to an end soon. You all witnessed the bloody brawl this weekend, where did this happen? At Kim D’s new Posche’s store. This is really getting old, every season the biggest “suprise drama” occurs in Kim D’s yard. The drama started when Melissa’s husband confronted the people who have been spreading rumors about her, and the only person they all blamed was, Tersa Giudice.

via Radar Online:
While Teresa has tried to play nice with Melissa Gorga, all hell broke loose at Kim D’s new Posche store opening on Saturday night, and according to eyewitnesses

“Joe Gorga approached a guy named Jonathan Karagiorgisa and confronted him about all the things he’s said about Melissa on Twitter, and Jonathan admitted he was writing about her.”

“As the two guys were arguing, Joe asked Jonathan where he got all his misinformation and Jonathan replied, ‘Why don’t you ask your sister?’”

Jacqueline Laurita’s husband Chris then joined Joe and confronted Jonathan over his allegations that the Laurita’s had made up their son’s autism diagnosis. That’s when the conversation turned violent!

“Jonathan was not backing down, and that’s when they all started to exchange blows!” the spy said.
“Jacqueline kicked off her shoes and bitch smacked Jonathan on the back of his head! This is where the Manzo boys along and Lauren Manzo jumped in out of nowhere to break up the fight!”

”Bowls were broken, glass everywhere,” the eyewitness said, and revealed the fact that Teresa and Joe Giudice were there watching it all unfold!

“Even though Teresa was blamed for the fight, and Jonathan said she was the one telling him all of the gossip about Melissa, she and Joe didn’t do a thing, they just watched it all unfold and didn’t even step in to try and stop the fight!”

Security finally intervened and “escorted a very bloody Jonathan out of the party. There was blood everywhere, on the floor and even on the walls.”

“My response to what Joe Giudice said about Autism is simply this: Autism is a developmental disorder that requires a LOT of extra time and special attention that sometimes parents of typical kids find it hard to understand. Google it.”

Of course this will be played out for the dramatic close to the season. What are your thoughts? Post your comments below.

Joe Giudice To Go On Trial In October