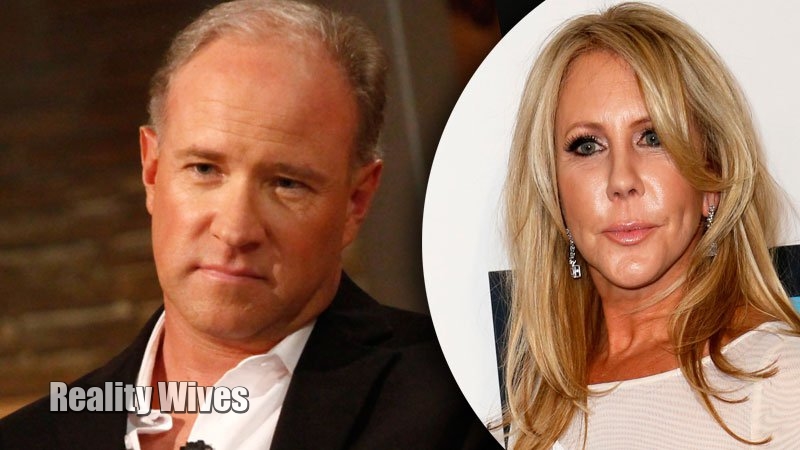 After months of seemingly dodging questions and criticisms about his cancer diagnosis and treatment, Brooks Ayers is finally be ready to tell the truth once and for all. Vicki Gunvalson‘s ex-boyfriend has filmed a secret interview with Bravo, which will air during the Real Housewives Of Orange County reunion.

Brooks went to New York City earlier this month, and “Bravo paid for the plane ticket and five star hotel. Andy interviewed Brooks about his cancer diagnosis and all of the questions surrounding it. Brooks didn’t want to be at the reunion because he just didn’t want to deal with the other ladies on the show, especially Meghan Edmonds. Vicki was completely blindsided by Brooks’ decision to do the interview with Andy. Complicating matters, Brooks isn’t telling Vicki anything about the interview. She has no idea what was said, or if he threw her under the bus!” an insider told Radar Online.

Brooks been accused of faking his non-Hodgkins lymphoma diagnosis and Vicki’s family and friends, “wants him to take a lie detector test to prove once and for all that he has the disease,” the source previously said.

“Vicki thinks it’s absolutely ridiculous that her kids doubt that Brooks has cancer. But there has never been any proof provided that Brooks does have it. When her kids asked him to provide proof, Brooks just scoffed at their demand and has refused to take it,” said the source.

Vicki is concerned because she “doesn’t want to look like a fool for dating Brooks. The silver lining of the situation is Vicki truly seeing Brooks as being an opportunist, and hopefully won’t get back together with him.” I think it’s too late for that.

Vicki and Brooks broke up last month and Vickie said in a statement at the time: “After much prayer, thought, counseling, and consideration, we have decided to end our four year relationship. We both wish nothing but a great future for each other. We have come to realize that one can indeed love someone in their heart, but that the time may come for their lives to take separate paths. Though the remaining episodes of Season 10 of The Real Housewives of Orange County will show us as a couple, the filming took place in January 2015 through May 2015. There will be no further statements or interviews regarding our relationship as we choose to move on with our lives.”