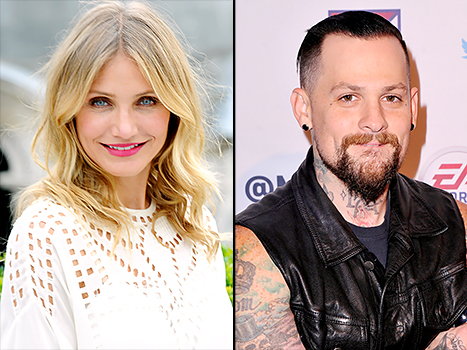 via US Magazine:
The Sweetest Thing! After years of claiming she wasn’t necessarily the marrying type, Cameron Diaz tied the knot with Good Charlotte rocker Benji Madden on Monday, Jan. 5.

The pair said their vows at the Annie star’s Beverly Hills pad in front of close friends and family on Monday evening, including guests Reese Witherspoon, Gwyneth Paltrow, Samantha Ronson and Robin Antin. Benji’s nephew, Joel Madden and Nicole Richie’s son, Sparrow served as the ring bearer. Joining Diaz as her bridesmaids were her BFFs Richie, Drew Barrymore, her sister Chimene and assistant Jesse Lutz. The event was orchestrated by wedding planners Yifat Oren and Stefanie Cove and featured flowers from The Velvet Garden — all companies used by Diaz’s longtime pal and Charlie’s Angels costar Barrymore in her June 2012 wedding to Will Kopelman.

Before saying “I do,” the couple celebrated with a rehearsal dinner catered by Lucques at the star’s Beverly Hills pad on Sunday, Jan. 4.

Us Weekly broke the news of the couple’s engagement on Dec. 19 after they had been dating for seven months. Though her road to the altar has featured a whirlwind romance, Diaz hasn’t always been a fan of marriage.

“I think the big misconception in our society is that we’re supposed to meet the one when we’re 18 and we’re supposed to get married to them and love them for the rest of our lives. Bulls**t,” the Golden Globe nominee, 42, told UK’s Stylist magazine in July 2010.