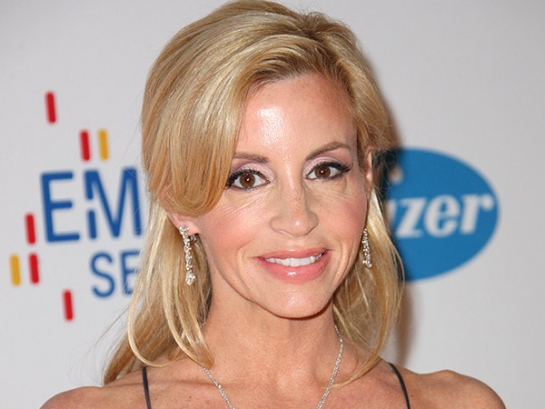 Camille Grammer, 45, the former Real Housewives of Beverly Hills star is recovering from surgery Friday after she was diagnosed with early stage endometrial cancer.

“She underwent a radical hysterectomy today. The surgery went well and she is expected to make a complete recovery following a significant recuperation period,” her rep, Howard Bragman, tells People Magazine.

Camille has two children via surrogate with her ex-husband, former Frasier star Kelsey Grammer, was at an elevated risk for cancer due to genetic issues, her rep says.

“[She] has been diligent about regular checkups and monitoring, which explains the early detection and rapid treatment. Ms. Grammer expresses gratitude to all the amazing health care professionals who have taken such loving and nurturing care of her. She urges all women to be aware of genetic factors relating to women’s cancers and get regular checkups,” says Bragman.

Endometrial cancer is any of several types of malignancies that arise from the endometrium, or lining, of the uterus. Endometrial cancers are the most common gynecologic cancers in developed countries, with over 142,200 women diagnosed each year. The incidence is on a slow rise secondary to an increasing population age and an increasing body mass index, with 39% of cases attributed to obesity.

We wish Camille a speedy recovery.

More in Real Housewives Of Beverly Hills (472 of 794 articles)