WARNING: DO NOT TAKE MY BLOG TOO SERIOUSLY! As believe you me, I’m not. I only watched the Real Housewives of New York, today here in Europe and that was on You Tube filmed on someone’s television and I could hear their comments about the show too! * Hilarious.

Well I’m pretty impressed with the new line up for RHONY so far. So pleased the left hand sofa at the reunion got booted, bar one (annoyingly). I also appreciate never having to hear the ‘nails on the chalk board’ Jill Zarin’s voice again in my living room, or the clanking of all her bracelets. HOORAY!! I’m happy not to be bored by the vacant Kelly, or to feel constantly awkwardness for Alex being chastised and belittled by the ‘ever gracious’ phony countess.

There might have been a girl called Cindy, but I can’t really remember her? 😉

Anyway it’s all good. It was time for a big change and Bravo knew exactly what they were doing – they listened to the viewers – thank goodness as like most of America, I wouldn’t be able to suffer through that same cast again. Zzzzzz. Ugh.

Ramona came right out of the gate in the first episode, like a wild dog with rabies. I could barely keep up 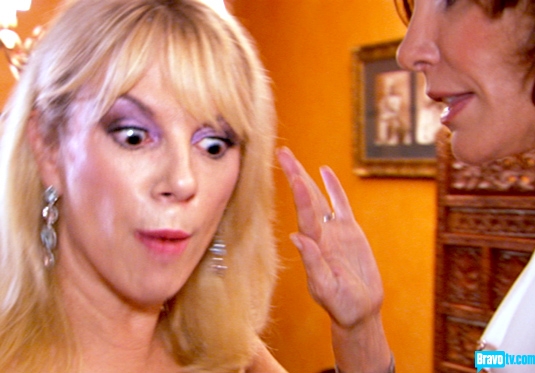 with her, as she sucked the air out of the room with her 1000-mile an hour chat, stuffed with her trademark chippy and digging remarks. She just can’t help herself! She absolutely exhausted me. Holy sh*t, I’d forgotten just how much she could talk at that speed. She is also repeating herself a lot, which is great if I miss it the first time. Not.

Ramona educating Heather, on a personal skills level, having only just met her, surely is something Ramona isn’t qualified to do. Pot and Kettle. Awkward.

However much I enjoy seeing phony Lulu taken down from her imaginary high horse, the fact that Ramona brings the kids into it is NOT ok. She’d have probably received a hard slap from me if I had been in Lulu’s shoes. *I bet they are REALLY big shoes* 🙂

By the way Ramona – you need a new hairdresser, like tomorrow. You can’t have black roots and white blonde? What’s going on there? 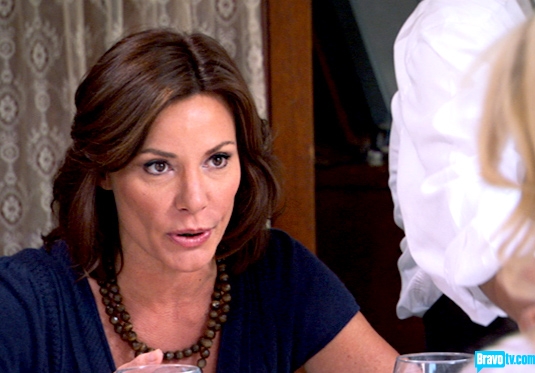 Talking of Lulu her new tag line is, can’t be bothered to type it. I mean who can say that? Who would ever want to come across on national TV as being so far up their own a**, that they can’t see day light? Will she ever learn any decorum dahrrrrrrrrrrling? 🙂

As far as speaking in French, and that being a possible code way that she and Aviva could communicate, does that mean that nobody in NYC understands any French? Is that why she thinks she is Chic ce la vie? Because nobody knows what she is talking about?

“ We looked at each other, like attractive women do” Bucket please. 🙁

Sonja is good entertainment. She is childish, funny, fragile, often totally inappropriate and nuts at the same time. I do enjoy her. She doesn’t bug the sh*t out me like most of the old cast did and a couple of them still do. What was with the “If he’s with me he’s comfortable” to Aviva about her ex-husband? That was weird and harsh, true or not.

So with the new chicks on the block. How did Bravo snag a couple (of what seem to be) beautiful, sane and smart women to team up with this show at this stage in the game? Amazing.

My first impressions I thought Heather maybe like Dana from the Real Housewives of Beverly Hills. The one who’s dialogue you fast-forwarded through. The really annoying, trying too hard and blowing which way the wind is blowing, one, but then after seeing more of her as the show went on, yes there is still something quite annoying about her but over all I thought she seemed ok. She owns and runs her own business and works hard. I respect that and her passion with her brand. Also that she gave old Ramona a taste of her own medicine, quite smoothly for a new girl 🙂 Personally I’m not a massive fan of big chats with anyone that gets that into talking terminal illnesses, transplants and death though. The jury is kind of out still.

Aviva. I Love her look, the way she dresses, her beautiful hair and charisma. She seems way too much of a lovely lady to get ‘ripped a new one’ by being a Real Housewife of New York! LOL.You can see she is trying to work it all out and make an effort with everyone. I wander whom her confidence, her looks, her lovely new family and the apparent lack of chips on her shoulders, will threaten first?

And then there is Carol. I think she is going to be the rising star of the show. She is totally a cool chick. Understated. A strong woman. A survivor. Quietly cool. I like her.

When Aviva is being sweet about her book, as a fan would be, she shuts her down eventually with the best newcomer line “Can you see my tits?” Love it! Good girl. I love her style and will definitely be watching to see how her story enfolds. 🙂 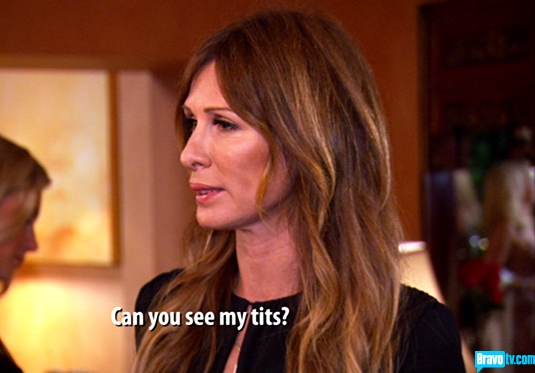 See you next week and I will post earlier in the day once I have streamed on line via India, Thailand and Poland J