You know the drill, my usual opening for those thin skinned reader, this blog is not to be taken seriously etc….

I have to start off with a burning question that I keep asking myself every time I hear the tag line “To some people living elegantly just comes naturally“.  Doesn’t anyone share that curiosity of WTF is that supposed to mean? Living elegantly, wow. If only one knew the secret of how to do it ‘naturally’ as opposed to artificially. I think it means that you make your toilet roll into a point after you have used it and stuff.

OK so lunch with Ramona, Carole and Aviva. Ramona provided gift bags to all except Sonja who was playing truant. 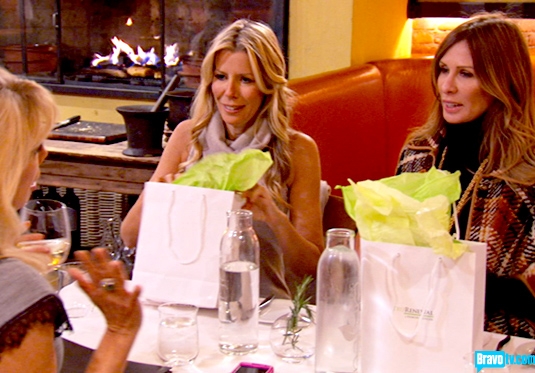 The majority of the scintillating conversation was based on how Heather talked too much. Aviva makes a point of saying how thoughtless a bag of skin care products was as a gift. I missed the gift that Aviva gave Ramona. I thought it was a nice gesture and let’s face it, probably Ramona’s ‘least letting herself down moment of the week’.

Sonja and Lulu sit and b-tch about Ramona. Lulu is being as shallow and fickle as usual but showing a blossoming insecurity over Sonja being Ramona’s friend too. How old are we ladies?

Heather and Ramona meet for drinks and that scene is very awkward. Ramona blinks 57,849 in five minutes and leaves through a revolving door.

Heather gives me the impression that she thinks she is just a little bit too cool for school now, a little bit too ‘big time’ advising her assistant to ‘not’ respond to Ramona’s invitation. Sorry sweetie, that’s just rude. Lulu would tell you that too. Page nine in Class With The Countess, check out the reviews on Amazon.

Lulu says that Heather is ‘gangster chic’ for not inviting Ramona to London. Said with such elegance and finesse, and lashings of chic, c’est la vie.

Aviva and Heather meet and gossip about Ramona. At this point I’m convinced that either Aviva is turning out to be a real two faced sh-t stirrer who can’t wait to start talking about someone the second she can, or she has a really hard core producer that’s very persuasive in giving her ideas for conversations. I’m not sure which one.

We heard again, for those viewers who were asleep or who were watching something else, all about Aviva phobia’s. Gas masks etc. 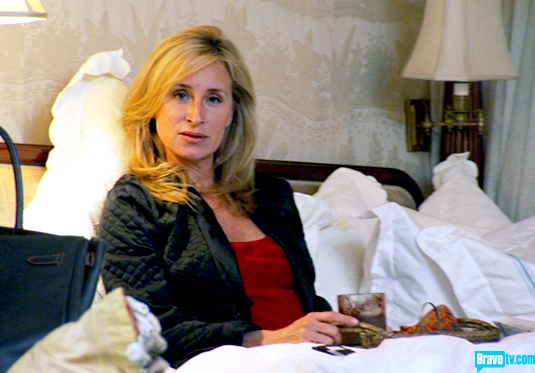 Sonja’s lying in bed reading the Washington Post trying to leave her own voice message and being served chocolate in bed by her intern, who is learning about life in NYC. Sonja is so busy she can’t listen to voice mails and later confesses to not have had the time to feed the dog either. She also tells her intern that she thinks she has only just got to bed from the night before. Rich White Girl Problems. It’s tough at the top. Seriously.

And then her party, where upon Lulu arrives dressed in what looks like the combination of a liquorish allsorts and a wet suit from behind. It was an awful dress. Good figure 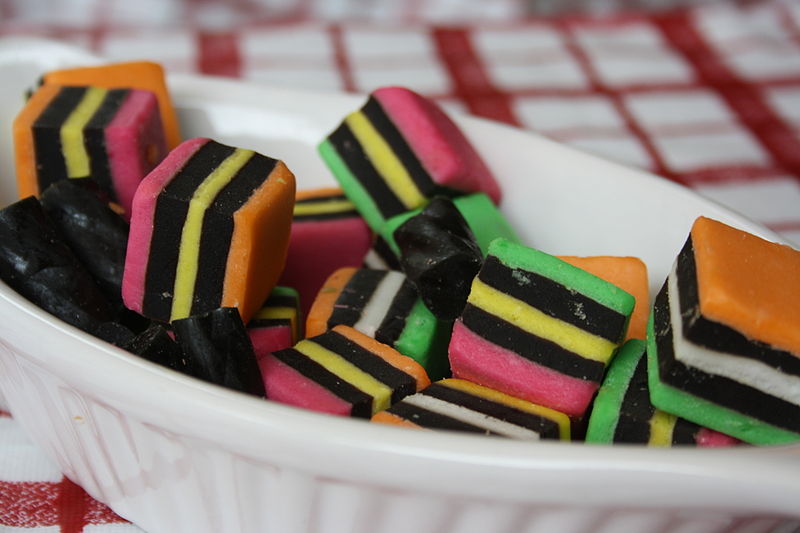 though Lulu. Carole floats around looking like a runway model in a fabulous low cut dress that I bet one of the camera men was hoping for a nip slip, it almost happened a few times. Then of course the Royal turrets line. BRAVO darling!!!

There was lots of continued bs about Ramona being NFI to London by the big, whiter than white, teeth grinning Heather. It’s all pathetic and childish. Is this the only topic of conversation available? Ramona freaks out at Sonja, obviously feeling threatened and insecure. They know each other so well that it’s their business to sort it out. Ramona loves Sonja even though she thinks she’s an air head and Sonja loves Ramona because she knows that even though she’s a pain in the a– to say the least on many occasions, Ramona loves her and would do anything for her.

I hate it when people gang up on others and I wouldn’t have suffered through that. So whether Ramona offended Heather, kissed her a–, whatever, who cares? She should have either invited her or not have invited the other cast members to make it so obvious. That’s hurtful and pathetic.

Heather, you are not Sue Ellen Ewing ok?

Aviva’s off again with her big spoon and her pot. 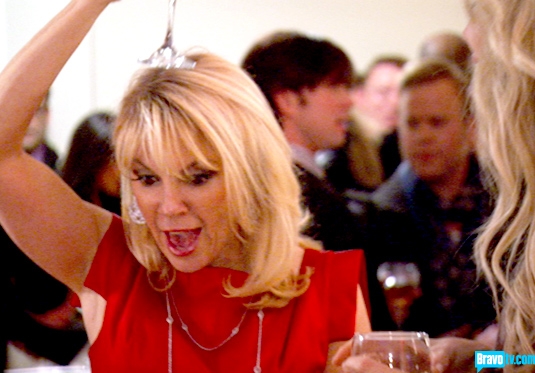 Ramona “Light bulb on my head. Pinot Grigio on my head”. We get the picture.

A man with blonde quiff and a silver jacket (who looks familiar) tries ridiculously hard to get some screen time, what else?

To be honest I agree, and as far as ‘entertainment’ goes, she is the one who is carrying the show right now, as far as I can see. Drunk as a skunk or not, without her scenes I probably would have zoned out. I want to see more Carole and Sonja, out and about having fun and I want to see less of Heather’s teeth.

I’m not a massive fan of this season yet, but I hope it gets more entertaining and interesting.

London’s coming up so that will be a nice change of scenery anyway. I wonder which places they will visit. And where was my call Sonja or Ramona by the way? I’ll remember that 🙂