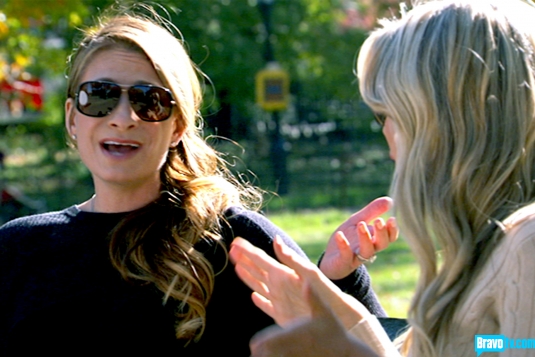 So folks, here is my recap of episode 5. Could I stay awake through the whole thing? Let’s see. Aviva and Heather sit in the park (on the same bench that Ramona and Lulu did in a previous scene, come on producers?) and Heather talks about her ‘most frightfully important international partners’ that she doesn’t want to be embarrassed by Ramona with? Wow Heather is so impressive 😉

We all know she runs a successful company but seems to lack quite a lot of personal skills. That’s BS as I’m sure she could keep Ramona locked in her room when she has her ‘international partners around ‘. Her cheesy ‘HOLLA’ in her tag line is seriously nauseating btw.

Then we get to see Lulu trying for a baby at 47, with more pricks in her than a second hand dart board. Ewwwww. I can’t stand 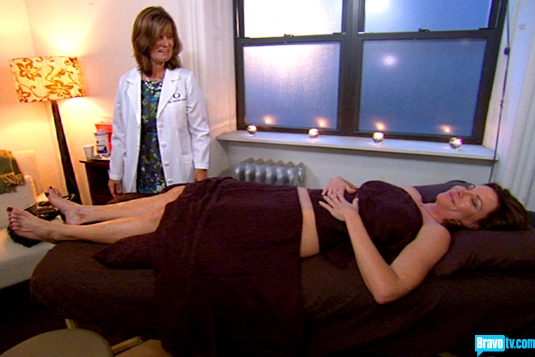 needles either. Apparently she could ‘feel the change’…mmmmm. Hearing about lulu’s sex life is something as a viewer I could do without, especially whilst I’m eating.

Heather takes her son to the doctors. It is a heart wrenching story, even if it did go on for several minutes too long. What a cutie Jacks is.

Sonja and Aviva meet up to talk about bows on their tops. This is where I nearly fell asleep……WHAT?? Are we struggling for conversation ideas?? Wait…then they talk about Ramona being N.F.I to London AGAIN??

The entertaining part was Sonja’s interview shots, where she is made to look so eighties that she could have just stepped off the dance floor having been dancing around to ‘Chameleon’ by Boy George. Sonja lives in a 5 storied home yet has her three ‘interns’ all clucking around in her bedroom with her unmade bed with the dogs in it! Hilarious. I have to say, if I was a young intern it would be a blast to work for her, depositing checks for $1.45 and everything, but I wouldn’t kid myself this was a normal ‘life experience’ LOL!

E harmony tells Sonja that she is in the 3 per cent they can’t match? What on earth did she tell them? What about Sugar Daddy.com? 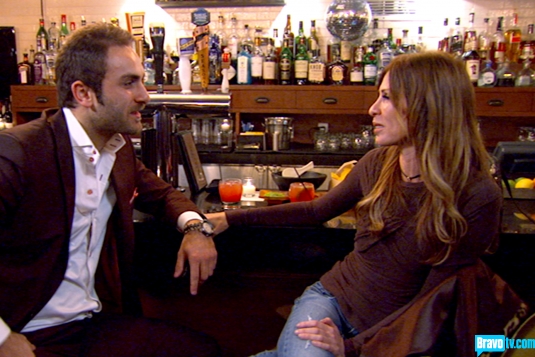 Here is the funniest scene this episode. Carole was spinning around on a bar stall all a flutter over a bearded designer who she managed to get on camera for a ‘research’ date? Yeah right! Nice research if you can get it. The sheer HORROR on her face when she thinks he is a Republican was priceless!! It was like he could have a terminal illness or something.

“Men don’t even get interesting until their 40’s” LMAO Carole. I love her one-liners! Then the whole ‘being funny in the bedroom banter got a little nauseous as he got a hard on for her. Carole doesn’t do kitchens. Remember she doesn’t put out either? 😉 It’s all in the name of research. Nice jacket btw. I have one the same.

Ramona gets an award for being the biggest neurotic drunk in NYC, oh sorry, I mean some business award. Probably for the consuming Pinot, and talks through other peoples speeches, saying they are full of sh-t.

I’m embarrassed for her that she has made such a big deal of not being invited to London. GET OVER IT! She’s a grown ass woman who can go to London whenever she wants! Who would want to hang out with Heather and Lulu anyway 1000’s of miles from home? We learn that Carole is a real princess. “Don’t **** with Cinderella! Love it! Now stick that in your pipe and smoke it Lulu. A title she didn’t buy and doesn’t use, because she is too cool. Take note Lulu.

Heather and her HUGE mouth tells the sales assistants, that Aviva has a wooden leg; their jaws were on the floor. I would have 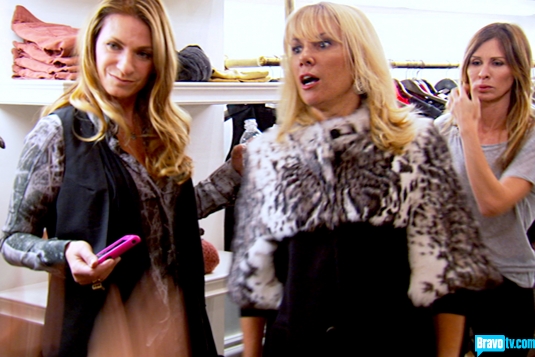 taken my leg off and given her a good smacking with it for sharing that then, and would have probably told the assistants that Heather had a bad case of hemorrhoids – wasn’t it amazing as you could never tell?! Heathers idea of building bridges with Ramona is to invite her to a friend’s store and tell her she needs an extreme makeover! Sweet. How to make friends and influence people?

Sonja is bang on – Ramona is Ramona, take it or leave it. She has always been the same and the last person I would take with cameras for a makeover!

Carole is celebrating her book becoming a TV show (I’m looking forward to doing that soon I hope 😉 and Ramona throws herself at her with such passion that she nearly sucked the life out of her, before she immediately steels the lime light by sharing the news that Target has taken her wine? How classy, chic and elegant. Sickly embarrassing. I bet the camera crew had problems keeping it together for that hum dinger!

Next week, it just HAS to get better! When is Aviva going to tell Sonja and Ramona they are white trash?? No wonder that has been played so much. I am waiting on the edge of my chair (well my sun lounger in Spain)..

Thanks to my friend Jamie Berteloni for pointing this one out “Elegance is learned my friend”, “To some living elegantly just comes naturally” Which is it Lulu?? You are confusing us ‘commoners’!!!