I had a feeling it would happen eventually and now I can honestly say; Heather bugs the crap out of me. Sorry. I actually had to fast forward the tag lines in order to guarantee not having to hear HOLLA ever again 🙂 and that was just the start of this episode!!

Aviva “All the cool girls have gone to London and I’m left here with Ramona!” Boo hoo. It could be worse; you could have been stuck with Heather, her fixed grin and her underwear chat.

Carole, Lulu and Sonja touch down in London town – Sonja is so my kind of chick on a 3 day girls trip – “Where’s the 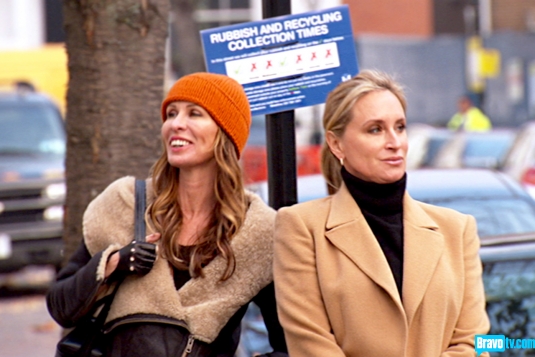 Champagne? I love that everyone drinks all day here in London”…. that’s not really true but I would be for sure, if you were in town!

Lulu is horrified at the idea of drinking a whole bottle, just in case she might drop her bulls–t regal-ness by mistake, and in London too, where all her ‘connections’ from when she ‘lead the life’ (according to her) transpire to actually be fictional characters? Oh no darling, that couldn’t happen!

Regardless of being painfully bugging and phony as always, I thought she looked fabulous in that white dress with that flower. She can certainly look the part, as long as she keeps her mouth shut 🙂

Carole’s decides that the camera crew are ‘all about nipples’ so happy to share and share alike now, having been teasing them for weeks with low cut dresses with sticky tape. High beams certainly lit the runway for that flight into Heathrow. 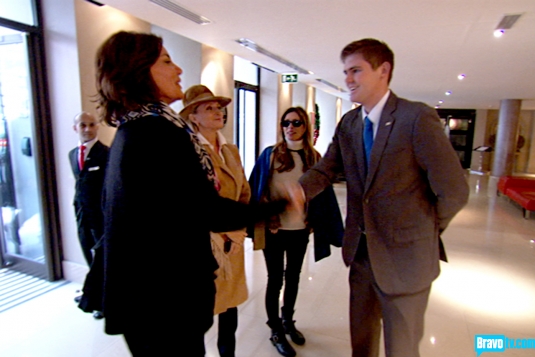 Lulu “I just love the British accent, don’t you?”

The hotel looks amazing, yet the name is virtually impossible to see and in fact even the manager says “Welcome to the hotel” rather than “Welcome to The Ritz. Welcome to the Savoy” etc. Why allow cameras and not advertise your hotel? Surely not embarrassed by a few real housewives from New York? 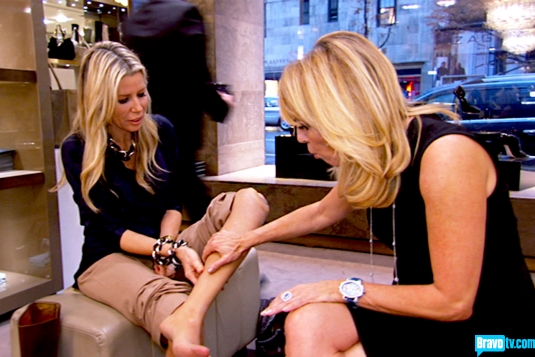 again…and again. As a viewer I’d like to think Aviva has more story lines than a prosthetic. We have seen that she baths the kids in high heels, but what else? Next please!

Ramona “Do you get pedicures on both feet?”  And she was serious! “No I like just having a french manicure on one foot only” 🙂

Back to London – Carol shares the most real and interesting part of the episode – when she spent time in London, at that time in her life after the loss of her husband, how she was feeling etc…..Bravo have certainly scored with her – the most fantastic, refreshing, new housewife in the franchise. Great to watch her and see how her character unfolds.

Sonja and Lulu look at her as if to say “Holy crap, what are we supposed to say as we aren’t used to people being so honest and real on this show?” 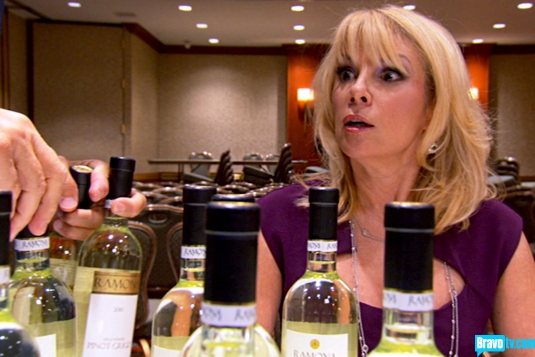 We talk underwear and a lot of it. Heather makes this sound which is something like a birds squawk, an old cassette player being fast forwarded when the girls arrive at her ‘brainwashing briefs’ seminar.

“She’s lost her mind” Carole says with that naughty smile from ear to ear. Seriously!

Holy s–t this is where if I was involved in being invited to something like that I would be getting checked out mentally afterwards. Like a scene from movie Step ford wives, where they all are drugged and wear frilly aprons and smile 24/7.

Heather makes everyone at the table chant her religion, one by one and cries with emotion at the success of how the Kool-Aid has worked so far. Until she gets to Carole. “This is like an AA meeting”.

Sonja has a fashion faux par at high tea and the others should have taken that hat off her if they were really friends. Nero collars look so fabulous on her – and she too looked great and funny, quick witted and amusing the rest of the time.

Lulu is starting to get under Carole’s nipples…… by just being who I think she really is. Not a pumpkin head. A pompous puss.

Lulu CANT BELIVE that she didn’t run into Carole years before in London, but unlikely as Notting Hill is one of the coolest hippest parts of London, full of artists and creative people and Lulu ‘hangs’ at places like Annabel’s ( a nightclub in Barclay square) which is one of the most overpriced, dated clubs, full of Arabs and Russian hookers. I imagine the last place that Carole would enjoy? Each to their own though Lulu….:)

Heather thinks that a pair of glasses, that make her look like a potato head are cool.

Funniest moment – crying with laughter at Ramona’s impression of Heather. If you didn’t catch it – rewind. It was brilliant TV 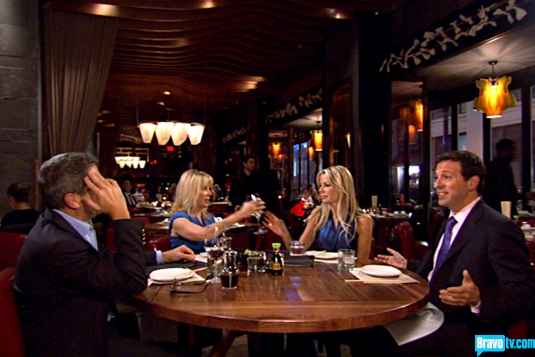 right up there with the turtle time clip and the ‘eyes on the runway’ fashion clip of hers. You can knock her all you like, and I do to (in jest) but nobody can say she isn’t entertaining! I watched that several times as it was so funny!

Aviva “We have a big place on the beach on Bal Harbour which is like the Upper East Side”. Nothing like a good brag squeezed in at a dull dinner.

“Heather has inspired me to make a new song – Gangster Chic – OH NO PLEASE LULU!!!!! NOBODY wants to hear you sing!! Come on! Do you honestly think that Andy lets you sing on WWHL because he likes your voice? I think like the rest of us, no one can believe you think you can sing. Stick to having sex and making a baby if you have time to kill. Not our ear drums. 😉

And finally we get a peek into next week’s episode where Heather tells Ramona to ‘bring it’ LMAO!!!!

I think it’s warming up…very slowly though. I wonder if it’s the same production company in charge? 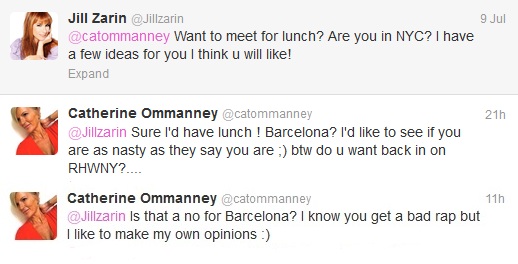 I mean, she has SO MANY haters I find it amazing – how would it feel to be loathed by so many people? I’d definitely have lunch with her, just out of interest if nothing else.

See you all next week and hope that my city is shown in all its glory, that Carole throws a few good lines to Lulu, that we don’t hear any more about Aviva’s legs or lack of, and Heather and Ramona get stuck in to a nice verbal boxing match. “BRING IT” as Heather would say..