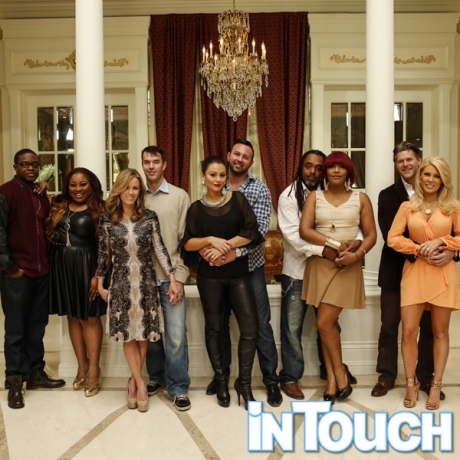 via InTouch:
What do ex-Bachelorette Trista Sutter, Jersey Shore’s JWoww, WE tv’s Traci Braxton, Bad Girls Club’s Tanisha Thomas and Real Housewife Gretchen Rossi have in common? In Touch can reveal that all of these celebs have volunteered to have a team of marriage counselors whip their relationship into shape in early summer 2014 on WE tv’s Marriage Boot Camp. Only In Touch has the exclusive interview with Boot Camp director Jim Carroll about the upcoming reality show.

On a recent episode of WE tv’s Braxton Family Values, Traci demanded that her husband of nearly two decades, Kevin Surratt, take a paternity test to disprove rumors that he’d had a child outside their relationship. “Traci and Kevin have huge hurdles to overcome,” Jim tells In Touch. “They’ve made every mistake you can make, and infidelity would be poisonous to a marriage.”

Trista and Ryan Sutter are “not perfect,” Jim tells In Touch. “And they would be the first to admit it.” Trista has told the mag, “We definitely have difficulty communicating.”

Roger Mathews, fiancé of Jenni “Jwoww” Farley, struggles with her high-profile persona a few months before he proposed to the Jersey Shore star, he even told In Touch that he wanted to get married but wasn’t sure “how that would fit with her hectic schedule.”

Tanisha Thomas and Clive Muir from Bad Girls Club have been plagued by infidelity. “Tanisha and Clive struggled throughout the entire boot camp both individually and as a couple. Marriage Boot Camp was their last ditch effort to see if there was any life left in the marriage,” Jim reveals to In Touch.

Gretchen has always worried that her commitment-phobia could threaten her relationship with Slade Smiley. “My first marriage ended in divorce,” the Real Housewives of Orange County star has said to the mag, “and then my second fiancé passed away, so I kind of felt jinxed.”