I think what I need to do is work on Chad 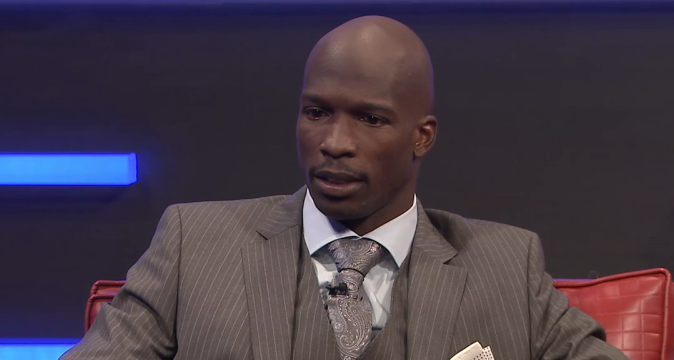 I lost two things that I love – Football, Wife. You never know what you have till it’s gone.

Chad Johnson has enrolled in anger management classes to learn how to suppress his rage so he doesn’t involve himself in another violent altercation. He made the announcement during an interview with James Brown on “Inside the NFL”.

Chad Johnson and Evelyn Lozada were legally granted a divorce from a judge this morning.


On the mistakes he has made:

BROWN: Do you think that was the reason although the coach was saying that wasn’t necessarily it?

JOHNSON: That was the reason. There is no need to blow smoke up my ass. First off, I lost two things that I love, honestly. Football, I love, you know that. You know the way I played the game. I enjoyed it. I had fun with it. Being married, being a husband, being a lover, was an honor. And I lost that. And you know that saying, they always have that saying, ‘You never know what you have until its gone.’ And now I finally know what they mean. I lost two of the things that really meant the most to me, that someone completed my world, completed me period. But I just hadn’t made that transition to where I needed to be the best man that I could, or best husband that I could. I didn’t make it all the way, fully.

JOHNSON: I am in a structured program. For one, I’m taking classes, anger management classes. I’m trying to find out how can I channel my anger when I’m in situations to where I would pop off? How can I diffuse those situations, trigger points?

On reconciling with his wife:

JOHNSON: You know what’s funny? Is when you say that and I think about life in general and some of the things that you fought (pointing to Collinsworth) and some of the things you fought for (points to Brown). The struggle, all we’ve been through, we’ve all struggled, but we’ve all fought to get to a certain thing or something that we wanted. Like what I went through and fought for when it came to football. And I think to myself, do I walk away that easy or do I fight for what I love? Like the game of football, I’m not giving up on that, but I lost it. So I lost my wife, do I fight for her? Yes.

JOHNSON: Yeah of course. I don’t think I said that though on TV. It is what it is. I took full responsibility for it. I apologized for it.

COLLINSWORTH: So you’re not blaming your wife at all?

JOHNSON: I take full responsibility for everything always. Always will, always have. Where do I go from here? I think about it. I’ve got to work on Chad. Chad has to work on Chad. Chad has to go deep down inside and figure out where he went wrong. At what point did you lose focus on what’s most important? Like especially the game of football… At some point I had drifted off track away from that and being one of the best at what I do. Not only being the best at what I do, but I would tell you what I’m getting ready to do, and I would do it.

It’s all well and good for Chad to take anger management classes now. What he allegedly did was terrible. But shouldn’t Evelyn also be taking classes too? Iyanla just isn’t enough.