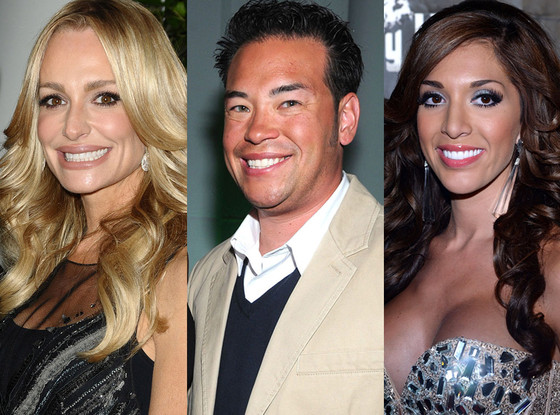 via Huffington Post:
The four and a half couples to undergo therapy this season are include Taylor Armstrong (“Real Housewives of Beverly Hills“) and John Bluher, Ghostface Killah and Kelsey Nykole, Whitney Mixter (“The Real L Word”) and Sada Bettencourt (“The Real L Word”), Jon Gosselin (“Jon And Kate Plus Eight”) and Liz Janetta, and Abraham (“Teen Mom“). Yes, the “Teen Mom” star will be appearing solo.

The casting announcement comes on the heels of one of the most infamous couples from the show’s history, Courtney Stodden and Doug Hutchison, announcing they are ending their marriage after two and a half years.

Stodden cited their 34-year age difference as the reason for the breakup.

The latest cast is sure to make headlines: It’s Gosselin’s and Abraham’s return to reality TV.

The couples will once again be treated by Dr. Jenn Berman, who is a leading family and marriage counselor and can be heard nightly on “The Love and Sex Show with Dr. Jenn” on Oprah Radio on SiriusXM.

via Press Release:
LOS ANGELES, Nov. 12, 2013 /PRNewswire/ — Relationships are hard enough, but imagine the pressure of having your hook ups, “bumps” on the relationship road and breakups as fodder for the tabloids. More and more, it seems couples whose matters of the heart play out in the public eye are calling it quits and throwing in the towel on their relationships. Why is it so tough for these couples to stay together? Looking to shed light on the issue, VH1 will examine the complicated and often misunderstood world of high-profile relationships with “VH1 Couples Therapy.”

In season 4 of “Couples Therapy” we will get a look at four-and-a half couples who are facing very complicated issues never before discussed on the show made even more complicated when half of one couple is a no-show. Taylor Armstrong (RHoBH) & John Bluher, Farrah Abraham (Teen Mom), Ghostface Killah (Rapper) & Kelsey Nykole, Whitney Mixter (The Real L Word) & Sada Bettencourt (The Real L Word) and Jon Gosselin (Jon & Kate + Eight) & Liz Janetta will all take a seat on Dr. Jenn Berman’s couch. “VH1 Couples Therapy” is set to premiere January, 2014 with 8, one-hour episodes on VH1.

From the producers of “Celebrity Rehab with Dr. Drew,” “VH1 Couples Therapy” is the first reality show to examine firsthand the real life experiences of a group of buzzed-about couples. For some of these couples, living under constant scrutiny from the media and fans makes it increasingly hard for them to stay together and VH1 wants to see why they can’t seem to go the distance. These four-and-a-half couples, at a crossroads in their relationships, will join together for over 2 weeks as they undergo intensive relationship therapy. Under the guidance of Dr. Jenn Berman, a nationally renowned relationship therapist, the couples will participate in group and individual therapy along with relationship exercises out in the “real world” to see if they can rekindle the love they used to have for one another — or if it’s simply time for them to move on.

Dr. Jenn Berman, a well-known marriage and family therapist, columnist, author, speaker, radio host will be the relationship therapist for the couples. Dr. Jenn is the host of the popular call-in advice program “The Love and Sex Show with Dr. Jenn” on Oprah Radio which is heard on Sirius XM nightly. She is the author of three bestselling books: SuperBaby: 12 Ways to Give Your Child a Head Start in the First 3 Years, The A to Z Guide to Raising Happy Confident Kids and Rockin’ Babies. People come to see her in her private practice for a variety of reasons, such as: relationship issues, parenting, eating disorders, substance abuse, depression, anxiety, self-esteem, trauma, and sexual abuse. She also works with performers and entertainment professionals dealing with creativity and performance issues and does consulting with a number of related organizations including The Actors Fund and A Minor Consideration. Dr. Berman also recently created the “No More Diets” application, which is currently available on iPhone & iPad.

Couples therapy has to be the last stop for z-list celebs. Why on earth is Taylor appearing on there, she just got engaged, RHONY’s Alex and her weirdo husband Simon, appeared previously and what in the world is Farrah doing on their by herself, she recently just started dating. Farrah needs regular therapy before couples therapy. Couples Therapy is set to premiere on VH1 in January 2014 with eight one-hour episodes. What are your thoughts? Post your comments below.