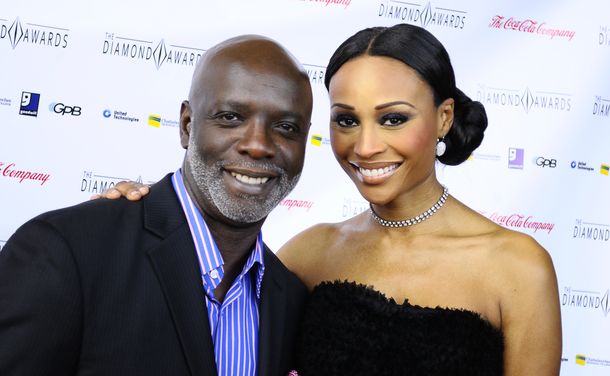 via Life & Style:
Real Housewives of Atlanta’s Peter Thomas won’t let a little thing like the proximity of his wife, Cynthia Bailey, get in the way of his fun.

An eyewitness exclusively reveals to Life & Style that at a Golden Globes bash at 1Oak on Jan. 12 the couple had attended together, Peter — unbeknownst to Cynthia — was “flirting up a storm” and grinding on a brunette named Ella.

“She was twerking all over his thigh,” a stunned eyewitness tells Life & Style.

“And he was giving people a thumbs-up while she did it! He also put his hands around her waist and nuzzled her neck.”

The eyewitness says Peter spent most of the night far away from his wife and with the brunette.

“There was tons of laughing, flirting…and twerking!”

The eyewitness adds that at one point, “It looked like he was going to kiss her!”

The reality TV duo went through some troubled times recently when Cynthia was diagnosed with fibroids.

The Bravo star even admitted to Life & Style had she not gone through corrective surgery, “We would be divorced for sure at this point. He wouldn’t have been able to take me anymore.”

And Peter confessed he considered straying at one point.

“Me and my buddies were planning a trip to Venezuela because nobody knows us there.”