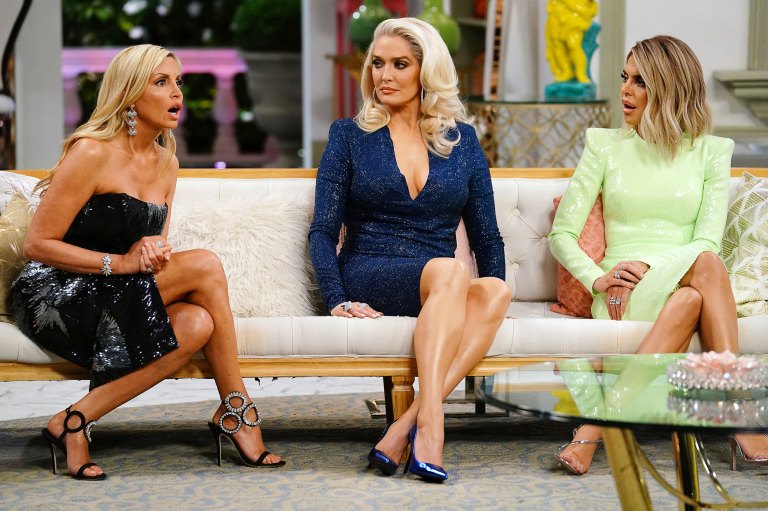 Real Housewives Of Beverly Hills ‘friend’ Camille Grammer Meyer, yes she has kept her ex-husband (who can’t stand her) and new husband’s surnames has had a ‘very challenging year’ according to her rep. It culminated in the reunion that only got worse for the one time Real Housewives Of Beverly Hills star at the season 9 reunion. According to US Weekly:

“Camille was not doing well with the duress of the reunion. She was basically melting down because she was under attack and she walked off once.”

The source also detailed one ‘particularly bad moment’ that won’t be shown on screen, Camille said, “Do you want me to be sorry because I’m a white woman?”

The other women responded, “Camille, do you know what you are saying? That’s not OK.”

I don’t know why Camille felt the need to say that, as the entire cast of RHOBH are whiter than snow. Obviously Camille has some issues, that have been miraculously kept of camera, her comment I am sure resonates with the entire cast.

A rep for Camille is trying to garner sympathy abut her bad year, “She has been under a great deal of stress. Her house burned down, her son has been living with her ex-husband, Kelsey Grammer, her beloved assistant passed away, her mother has been in and out of the hospital with cancer, and she had a federal trial in Dallas. She has had a great deal of pressure this year, and part of that manifested itself on the show.”

And all of that is still no reason to say what she said,

Camille obviously wasn’t happy at the reunion as she tweeted:

Apparently at the reunion, everyone went in on Camille. I don’t now why Bravo won’t air that moment instead of leaking it to the press.