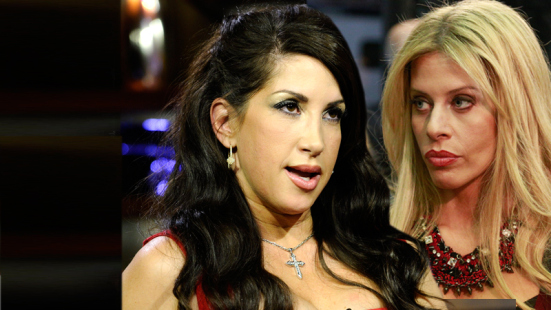 During the taping of the reunion of the Real Housewives Of New Jersey, Dina Manzo allegedly had a melt down about her sister-in-law Jacqueline Laurita’s daughter Ashlee Holmes being present. While Jacqueline herself was not at the taping, Ashlee (who is a makeup artist) was present to do Kathy Wakile and sister Rosie Pierro’s makeup for the show. A source close to Ashlee reveals that when Dina saw Ashlee was there she flipped out saying:

“Dina flipped out. As soon as she saw Ashlee, Dina threw a little tantrum and asked to have her removed. Production removed Ashlee from the main floor and into a separate room to work on the makeup. This made no sense, as Ashlee hadn’t done anything wrong. She just showed up to do her job. Dina was ranting and raving that she will never film a show with Jacqueline ever. I suppose she thought Jacqueline was going to show up to the reunion since Ashlee was there, but Jacqueline wasn’t because she was set to be a keynote speaker at an autism conference for the Talk About Curing Autism Foundation in California that day.”

Jacqueline’s five-year-old son Nicholas is currently battling Autism after being diagnosed with it while on the show. According to the source, Dina continued to bash Jacqueline and Ashlee after leaving the reunion along with her daughter Lexi saying:

“When the day wrapped, one would think the feud was done, but it wasn’t. Dina and her daughter Lexi continued to make passive aggressive tweets in an attempt to strike at the Laurita family on social media and behind the scenes.”

Following the reunion Dina tweeted: “Reunion is in the can, happy this is over.”