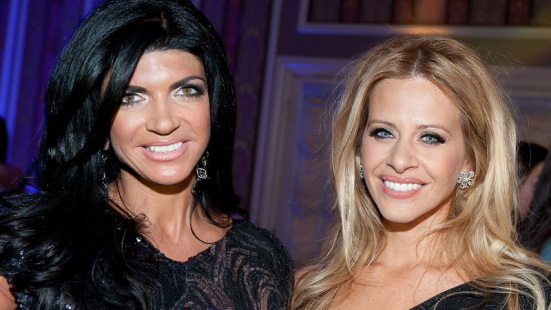 In the upcoming weeks before Teresa Giudice will be sentenced for her federal fraud charges, she has found comfort in her relationship with her friend of over 15 years Dina Manzo (Caroline Manzo’s little sister). Dina left the Real Housewives Of New Jersey after season 1 but has returned this season following Caroline and Jacqueline Laurita’s exits from the show. A source close to Dina has come forward claiming that her friendship with Teresa is fake and only to secure Dina’s spot on the show. The source says:

“As viewers of the Real Housewives of New Jersey know, Teresa and Dina are very close. Dina has cozied up to Teresa as she deals with her looming prison sentence  and the possibility of her husband, Joe, being deported. Teresa has been warned by their mutual friends to be very careful as far as Dina is concerned because she has ulterior motives. … [Namely,] using Teresa to become a central part of the show, and replacing her sister Caroline as the voice of reason among the cast.”

“It’s sad for Teresa because she really is a very trustworthy person, and doesn’t want to believe that Dina would use her, or betray her trust in any way. All of this drama is the last thing that Teresa needs at this time. And it doesn’t help that newest cast member, Amber Marchese’s husband, Jim, has been ranting and raving on the show that he is friends with the attorney general prosecuting Teresa’s case. It’s not even the Attorney General who is handling Teresa and Joe’s case,  and there is absolutely no proof that Jim is pals with the United States Attorney who is handling it.”

Dina and big sister Caroline have not been photographed together since 2010. This week, Dina tweeted that the family drama “breaks my heart. I have always kept my mouth shut.”

Do you think Dina and Teresa’s relationship is real? What are your thoughts? Post your comments below.