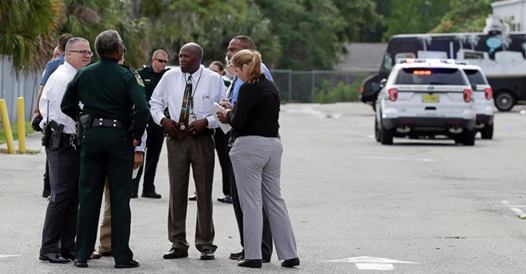 Five people were shot and killed by a “disgruntled” former employee at a workplace near Orlando, Florida, this morning, three years after the suspect was involved in another workplace violence incident there, according to authorities.

The suspect shot and killed himself after shooting his former co-workers this morning at Fiamma, which is part of an Italian company that manufactures awnings and accessories for RVs, authorities said.

A fifth person, a man, was taken to a hospital where he died, Demings said.

Seven people inside the business survived and are being interviewed, Demings said.

The 45-year-old suspect, who was armed with a handgun and a knife, shot and killed himself, Demings said.

Demings described the suspect as a “disgruntled” former employee who was fired in April 2017. The sheriff did not name the man.

In June 2014, authorities responded to Fiamma when the suspect was involved in another workplace violence incident, in which he allegedly battered another employee, Demings said. No charges were filed at that time, Demings said.

There’s no indication that the suspect was a member of any terror organization, Demings said, adding that this was “likely a workplace violence incident.”

It appears that the person he was accused of battering in 2014 was not one of the victims today, the sheriff said.

Shelley Adams told ABC News that her sister told her she was inside her place of business this morning when she walked out of the bathroom and saw someone lying on the floor.

Adams said her sister recounted the story on the phone and “was just hysterically crying.”

Her sister was OK, Adams said but “she kept saying, ‘My boss is dead.'”

The FBI is at the scene.

The shooting comes one week before the one-year anniversary of the June 12, 2016, mass shooting at Pulse nightclub in Orlando that killed 49 people.

Florida Gov. Rick Scott said in a statement, “Over the past year, the Orlando community has been challenged like never before.”

“I ask all Floridians to pray for the families impacted by this senseless act of violence,” Scott said.

This story is developing. Please check back for more updates.