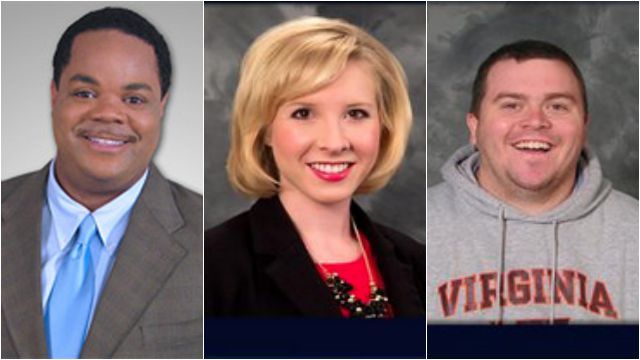 The suspect in Wednesday’s killing of two WDBJ journalists died at about 1:30 p.m. at a hospital of a self-inflicted gunshot wound, Franklin County Sheriff Bill Overton told reporters.

Police say a former WDBJ-TV reporter sought in connection with the on-air slayings of two of the TV station’s employees shot himself Wednesday on Interstate 66 in Virginia after police confronted him, a law enforcement official told CNN.

The driver refused to stop and sped away before running off the road and crashing, Geller told CNN. Troopers found the driver inside. He had suffered a gunshot wound.

He was transported to a nearby hospital for treatment of life-threatening injuries, Geller said. The driver is believed to be the suspect in the on-air shootings of two WDBJ journalists and an interviewee, she said without naming the driver.

Vester Flanagan, who was being sought in connection with the shootings, was a reporter at WDBJ for about a year using the on-air name, Bryce Williams, according to a former WDBJ employee.

Flanagan was fired from the station, though the reason was not made public, the ex-employee said.

“Two years ago, we had to separate him from the company. We did understand that he was still living in the area,” WDBJ General Manager Jeff Marks said.

ABC News reported that it received a fax containing a 23-page manifesto from someone named Bryce Williams, according to a tweet. The document was handed over to investigators, ABC said.

The network posted a short story reporting some of the manifesto’s contents. They show Flanagan alleging that he had been the victim of bullying and discrimination because he is gay and black.

He also says that he was compelled to respond to Dylann Roof’s massacre at a Charleston, South Carolina, church in June and was inspired by Seung Hui Cho, who orchestrated the Virginia Tech massacre in 2007.

Two videos posted on a Twitter account under the name, Bryce Williams, show someone walking up to the WDBJ news crew and pointing a gun at them.

He also says that he was compelled to respond to Dylann Roof’s massacre at a Charleston, South Carolina, church in June and was inspired by Seung Hui Cho, who orchestrated the Virginia Tech massacre in 2007. 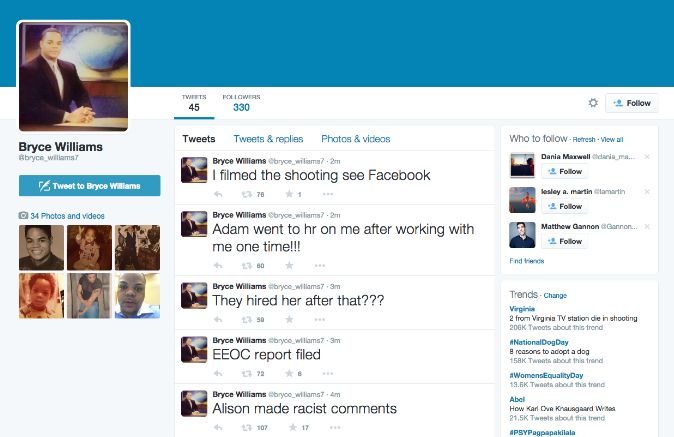 Ward’s fiancée was in the control room and saw the shooting, Marks told CNN.

Though Marks has heard that Flanagan had leveled accusations in the past, he said, “I don’t think (reporter) Alison (Parker) and that individual even overlapped here.”

Marks added he was not exaggerating when he says that Parker and photographer Adam Ward were “the kindest and nicest people who worked here. … I can’t figure out any connection.”

According to tweets from the Bryce Williams account, Alison had “made racist comments,” while “Adam went to hr on me after working with me one time!!!” There was no elaboration, and CNN was unable to immediately confirm if either claim was true.

The woman being interviewed, Vicki Gardner, executive director of the Smith Mountain Lake Regional Chamber of Commerce, was shot in the back and is in surgery, said Barb Nocera, the chamber’s special projects manager. 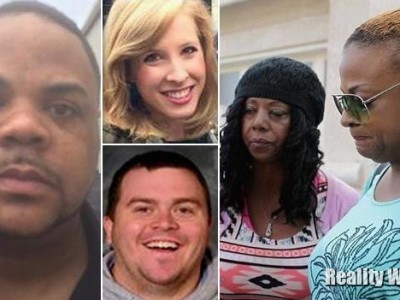