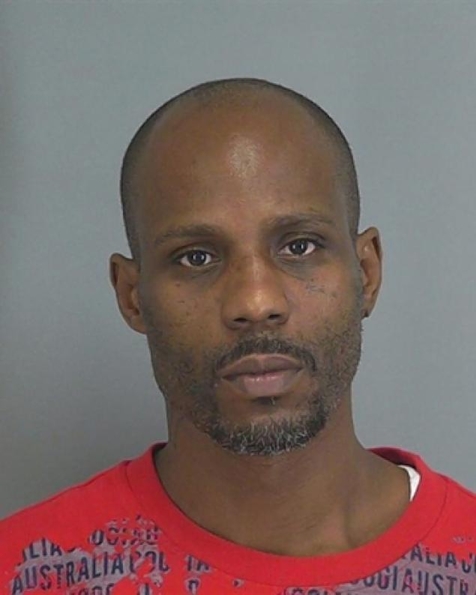 Rapper DMX has been arrested in South Carolina and charged with driving under the influence. Greenville County jail officials say the DMX, 42, whose real name is Earl Simmons, was arrested early Friday morning. He was also charged with not having a driver’s license.

DMX was arrested last year in nearby Spartanburg County for suspicion of driving without a license. He was released after paying a fine.

Jail records show Simmons has been released. It isn’t clear if he has an attorney.

DMX was arrested in a Phoenix suburb in 2011 after a trooper clocked him driving at 102 mph. He had recently finished a stint in prison on probation revocation for failing to submit to drug testing and driving without a license.

DMX is the father of ten children.He was married to Tashera Simmons in 1999 and they were married for eleven years. In July 2010, Tashera announced their separation (two weeks following DMX’s release from prison). DMX maintains that the two remain friends.

DMX Legal Troubles
1998-99
DMX was tried for rape and sodomy, sexual abuse, and unlawful imprisonment. The case was dismissed when the DNA evidence did not match his own DNA.
DMX joined rappers Jay-Z, Method Man, and Redman for Jay-Z’s 1999 Hard Knock Life tour, during which he was arrested for charges of a stabbing at a tour stop in Boston, Massachusetts; he was cleared of the charge (and another assault charge during the same year in his hometown of Yonkers).
DMX and his wife were arrested in 1999 after his uncle (and then manager) was accidentally shot at a hotel in New Jersey, charged with animal cruelty and possession of crack cocaine and weapons. DMX successfully plea-bargained, which reduced his sentence to paying fines, probation, and community service.
When officers of the Fort Lee Police Department executed a search of his home in 1999, DMX promptly surrendered himself on weapons possession charges.

2000-05
DMX served a 15-day jail sentence in 2000 for possession of marijuana.
Following a concert in Buffalo, New York in March 2000, DMX was arrested from a vehicle on New York State Route 33 in Cheektowaga, New York. He was charged with aggravated unlicensed operation of a motor vehicle, speeding, failure to signal, driving without a license, failure to notify the DMV of an address change, and possession of marijuana. He failed to appear at the subsequent hearing scheduled for March 21 in Cheektowaga, which lead to a warrant for his arrest. He later turned himself in, pled guilty to a reduced charge of driving without a license, and was sentenced to 15 days in jail and fined $400.
DMX served another jail sentence in 2001 for driving without a license and possession of marijuana. His appeal to reduce the sentence was denied; rather, he was charged with assault for throwing objects at prison guards. DMX entered rehab to treat his addiction to drugs in 2002.
In June 2003, DMX was arrested for using indecent language during a performance at Saint Kitts and Nevis. The country’s Information Minister alleged that a contract signed before the concert stipulated the show would be without indecent language on stage. DMX was released on $376 bail.
DMX was arrested in June 2004, at the John F. Kennedy International Airport, on charges of cocaine possession, criminal impersonation, criminal possession of a weapon, criminal mischief, menacing, and driving under the influence of drugs or alcohol, while claiming to be a federal agent and attempting to carjack a vehicle. He was given a conditional discharge on December 8, 2004, but pled guilty on October 25, 2005, to violating parole.
DMX was sentenced to 70 days in jail on November 18, 2005, for violating parole; the lateness charge added a 10-day extension to the original 60-day sentence. DMX was released early (for “good behavior”) on December 30, 2005.

2008-11
DMX pled guilty to charges of drug possession, theft, and animal cruelty, at a hearing on December 30, 2008; he was sentenced to ninety days in jail on January 31, 2009.
On May 22, 2009, DMX entered a plea agreement/change of plea, and pled guilty to attempted aggravated assault.
After serving four out of six months for violating drug probation, DMX was released from jail on July 6, 2010. That day, a television pilot was filmed to portray his road to recovery; however, DMX was arrested three weeks later and the pilot did not evolve into a series.
On July 27, 2010, DMX turned himself in to Los Angeles Metropolitan Court for a reckless driving charge he received in 2002. He was sentenced to serve ninety days in jail.
DMX was arrested in Maricopa County, Arizona on November 19, 2010, on charges of violating his probation by consuming alcohol (at a performance). On December 20, 2010, DMX was moved to the Mental Health Unit of the Arizona State Prison, and released on July 18, 2011.
DMX was arrested on August 24, 2011, for speeding (recorded as 102 mph in a 65 mph zone), reckless driving, and driving with a suspended license. While DMX admitted to speeding, he claims he was driving 85 mph, not 102 mph as charged. DMX sued the Arizona police.