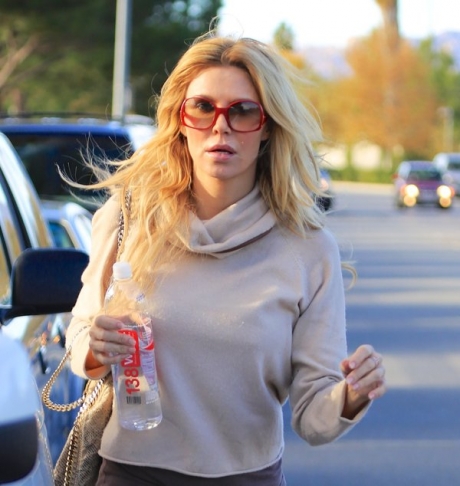 via InTouch Mag:
Real Housewives of Beverly Hills star Brandi Glanville is known for her love of partying – after all, her New York Times bestselling book was called Drinking and Tweeting And Other Brandi Blunders. But after a string of embarrassing incidents on the show and on social media, some are wondering whether the single mom needs a trip to rehab.

Brandi’s drunken antics on Housewives have gotten out of hand this season. After she made racially-tinged insults about newbie Housewife Joyce Giraud, who is Puerto Rican, Brandi tried to do damage control by writing – and then deleting – an open letter to Bravo on Facebook. In the rambling, incoherent letter, Brandi claimed that she’d only been drunk “two and a half times” during filming.

This isn’t the first time Brandi has had to defend her drunken misdeeds. After she was photographed stumbling out of a club – and her dress – over the summer, she tweeted “I got drunk with my gays, it’s not murder.” The 41-year-old mom of two boys also claimed that she only parties when her sons were with their dad, Brandi’s ex-husband Eddie Cibrian, and that she drinks to cope with the loneliness of missing them.

“Absolutely I am concerned about her,” former RHOBH castmate Taylor Armstrong told In Touch. “I know what it’s like to go through a challenging time and to make decisions that are not necessarily the best thing for you. She and I are not that close for me to be disseminating advice to her, but I know that she probably is not feeling great about things right now and that’s a tough place to be.”

According to the Daily Mail, Brandi’s castmates are concerned about her drinking. Fellow Housewife Kim Richards, who has been public about her own struggles with addiction, tried to set up an intervention for Brandi that would be filmed for the show, but the blonde former model refused to take part. One thing’s for sure, though – if Brandi keeps getting a bad edit on RHOBH, it could be her career needing the rehab.

More in Real Housewives Of Beverly Hills (436 of 800 articles)