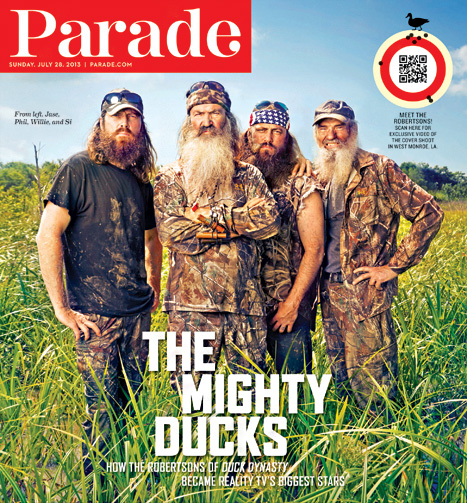 The men of Duck Dynasty are covering Parade Magazine this weekend. Duck Dynasty, is the hit A&E reality show about a family that got rich, but stayed very humble and spiritual, making products geared toward hunters. Since it premiered March 21, 2012 the show is the No. 1 nonfiction cable series; its third-season finale in April drew 9.6 million viewers, an A&E record. Of course having a hit reality show has helped the family business, Duck Commander: The company expects to sell more than 750,000 duck calls this year, up from 60,000 in 2011.

The Robertson family consists of patriarch Phil; his wife of 49 years, Miss Kay; their sons Willie, Jase, and Jep, all of whom work for the family business; their wives and children; and Phil’s endearingly odd younger brother Si. Season 4 begins August 14, and we are introduced to Phil and Kay’s eldest clean-shaven son, Alan, who rejoined the business last year after two decades as a preacher. On June 10, 2013, it was announced that the family is working on a Christmas album, titled Duck The Halls: A Robertson Family Christmas. It is scheduled for release on October 29, 2013. The 4th season starts August 14, 2013.

Willie took over as Duck Commander’s CEO in 2006, and sensed that Duck Dynasty could be good for business. But he had one initial concern.
The title. “I thought, ‘That sounds like a Chinese food place!’” he tells Parade.

Si, the show’s breakout star, routinely gets marriage proposals, even though he’s been hitched to wife Christine (who brews two gallons of tea for him daily) for 40 years. Why hasn’t she ever appeared on the show?
“She’s got better sense than the rest of us,” he cracks.

Each episode typically includes a sitcom-esque setup, some suggested by the producers.
“They come up with ideas, but I get to be myself in those ideas,” says Jase, who has nixed ideas that make him uncomfortable. “One day when we were gonna play golf, a wardrobe person brought me a pair of knickers,” he recalls. “I guess they thought that would be funny. But I don’t wear knickers. They said, ‘A&E wants you to.’ I was like, ‘I don’t care!’”

Doing the show has brought the clan “a whole lot closer” says Willie.
“It’s probably the opposite of most reality shows. And nobody gets a big head because we’re doing it all together.”

Duck Commander’s warehouse attracts throngs of fans, which Jase says he doesn’t understand.
“I told Missy, my wife, the only person I’d stand in line for is God Almighty: ‘You made the universe? All right, I’ll get in line!’”

The beards, grown for hunting, are now a show trademark.
Still, Jase’s wife, Missy, says, “Jase is so handsome, I’d like to actually be able to see his face.”

How much longer does patriarch Phil plan to be part of the show?
“Not long. But I think it’ll go on without me.”


Well we hope not, Phil. We want you to be a part of the show for as long as possible. One of our favorite shows is Duck Dynasty. What are your thoughts? Post your comments below.