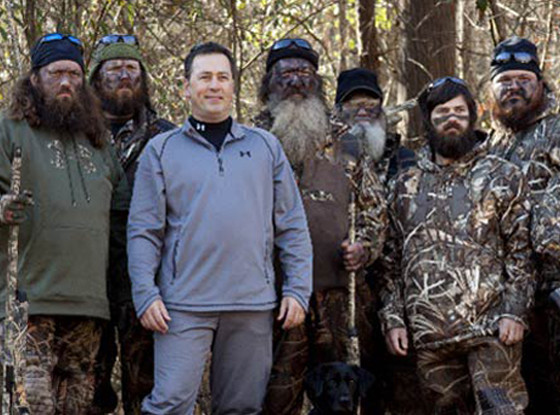 Duck Dynasty to Feature Beardless Brother Alan Robertson in Season 4. Alan Robertson, the clean-shaven pastor, is set to join the rest of his family, the famously bearded Duck Dynasty clan, on their hit A&E reality series this fall, the New York Post reports. Alan is the eldest of Phil and Kay Robertson’s four sons his younger brothers are Willie, Jase, and Jep and the only one who doesn’t have a beard, or work in duck call manufacturing.

Duck Dynasty is A & E’s hit reality show about a family that struck it rich with their company Duck Commander. Duck Dynasty is a fantastic show because viewers relate to the Robertson family that combines family values and fun The patriarch is Phil, 67, who founded the company; everyone’s favorite crazy Uncle Si, 65, who is always getting into trouble and has the best catch phrases, jack! Matriarch Kay, 66, married to Phil, and mother of four sons including Willie, 41, the CEO; Jase, 43; and Jep, 35, the quiet one.

Now joining the forth season is brother Alan 47, who is joining the cast. He has never appeared on an episode. He’s quitting his job as a full-time pastor to work for the family business.

“The beards are so iconic. All this time I’ve been flying under the radar; I can go to Starbucks and get Mama coffee. What I do for our church you see, it’s a pretty good-sized churchimpacts a lot of people, but because of my association with the show, I’ll get to minister to a lot more people. Any person that’s an evangelist, that’s what you want to do, so I had to give this up for something possibly bigger.”