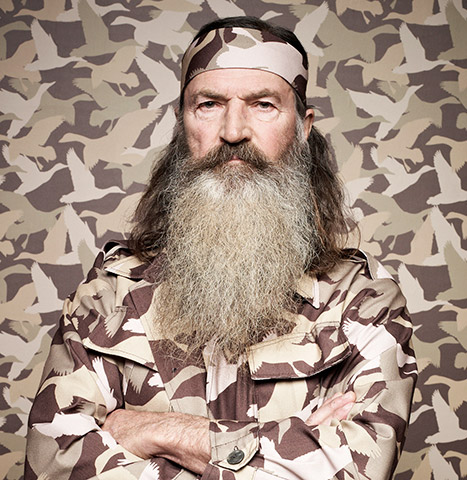 via US Magazine:
Throw whatever shade you want at Phil Robertson — he’s not about to duck and cover. As evidenced by his controversial comments about race and homosexuality in GQ last December, the 68-year-old Duck Dynasty patriarch isn’t afraid to speak his mind, even if it alienates fans of his family’s A&E reality show. In fact, he’s about to put himself out there again in a new book, unPHILtered: The Way I See It.

“I don’t worry too much about people hating or insulting me,” Robertson tells Us Weekly’s Asher Fogle in the new issue, on stands Friday. “I’m a sinful man, and I’ve made a lot of mistakes. People have reason to hate me.”

That said, he thinks the GQ controversy was overblown. “All I did was quote a passage of scripture from antiquity,” the father of four says of the interview, in which he lumped homosexuality with sins like bestiality and adultery. “They’re mad at me, but I’m really just quoting what God said, so He’s the one they have a problem with.”

As for his remarks suggesting that black people were “singing and happy” in the pre-Civil-Rights-era South? “I was just giving my experience,” he tells Us of working on a Louisiana cotton farm in the 1960s. “The point I was making was that even when our black brothers didn’t have their civil rights, those people had that one thing the government couldn’t take from them: their faith. They would sing spiritual songs as they were going across those cotton fields.”

A self-proclaimed “poor white boy,” Robertson insists he meant no offense by the comments. “Old Jesse [Jackson] got mad at me and said something about how I was a Jim Crow and a racist,” he recalls of the backlash. “We don’t look at people like black, white, and brown. We’re all members of the human race.”

Pitting people against one another, he says, is why we have gun violence. “It’s never been a weapons problem,” he posits. “It’s a human heart condition of anger and hatred. If people loved God and loved each other, the last thing you would ever contemplate is to murder your neighbor.”

For more from our interview with the Duck Dynasty star — including his thoughts on politics and government, his reaction to being called a “bigot,” and why he hates social media (and has never even “turned on a computer”) — pick up the new issue of Us Weekly.