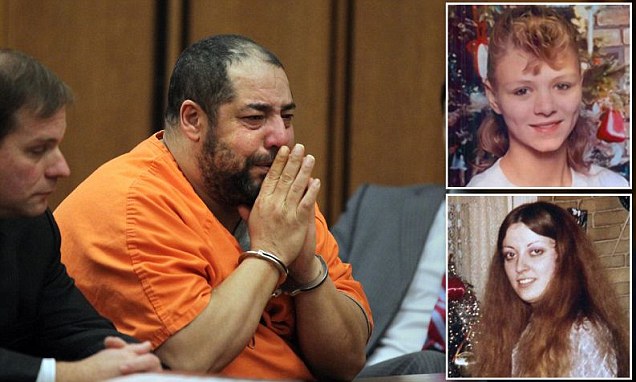 via Cleveland:
Convicted sex offender Elias Acevedo Sr. will serve life in prison as part of a plea agreement in which he admitted today to killing two Cleveland women and devastating the lives of many others. In addition to the murders, the 49-year-old admitted to raping his sister-in-law in 1993 and sexually assaulting his three daughters repeatedly for years. Assistant Cuyahoga County Prosecutor Blaise Thomas said Acevedo will never be paroled from prison and his total sentence agreed to is 445 years for all the crimes, which left a “wake of emotional wreckage” for his victims and could have easily been deserving of a death penalty.
Three of Acevedo’s daughters, now grown, gave gut-wrenching statements about how the years of rape and abuse had damaged them.

“You have changed my life forever,” one daughter said. “You robbed me of my childhood…I have lived in fear but I will no longer.”

The Plain Dealer normally does not identify victims of rape; however, Acevedo’s victims in the case consented to revealing their relationship to their attacker. They said they are getting help and healing. The women’s aunt spoke about how Acevedo raped her 20 years ago when she was 18 years old, and 5 ½ months pregnant with his brother’s child.

She reported the rape but didn’t go forward with charges because she was afraid.

“I am grateful I can stand here today as one of his survivors,” she said. “Back then I was the coward, but I’m not a coward anymore.”

The woman, now in her 30s, was key in helping investigators gather information on Acevedo after her 1993 rape case was reopened as part of the county’s DNA Cold Case Task Force initiative after a rape kit collected 20-years ago was recently tested.

Acevedo’s living rape victims and other witnesses gave investigators from the FBI Violent Crime Task Force vital information and ammunition as they began probing his possible involvement in the 1995 disappearance of Christina Adkins this spring, in the wake of the Ariel Castro case. As a part of Monday’s court hearing, FBI Special Agent Andrew Burke described how Acevedo was first confronted with evidence related to the chronic sexual abuse of his daughters. He eventually admitted to those crimes, which alone could have netted him life in prison.

But when investigators first asked him about Adkins, he denied any involvement. It was only after Cuyahoga County Prosecutor Timothy McGinty agreed to take the death penalty off the table that Acevedo confessed to killing Adkins and 30-year-old Pamela Pemberton in 1994. McGinty credits Burke’s dogged determination in solving the cold cases despite having little evidence initially that connected Acevedo to the murders. He said the interrogation, which lasted hours, was masterful.

Acevedo knew both Pemberton, who was his neighbor, and Adkins, who was his cousin’s girlfriend. Acevedo told authorities that they he and Pemberton were drinking with friends and later walked to Clark Field in Tremont. When Pemberton refused to have sex with him and yelled at him, he raped and strangled her, leaving her body in a wooded area where it was later discovered by neighborhood boys.

Just 2 ½ months later, Acevedo said he ran into Adkins on West 25th Street. The 18-year old was five months pregnant and was upset. Acevedo convinced her to walk with him to an area near a highway interchange. When she resisted having sex with him, he raped her. When she threatened to tell her boyfriend and Acevedo’s wife what happened, Acevedo told investigators he snapped and killed her, and put her body into a nearby utility vault, where it stayed for 18 years. Burke testified during a hearing Monday that Acevedo was one of the last people seen with Adkins before she disappeared, though his name in the initial police report was incorrectly listed as Eliza Rivera.

Cuyahoga County Common Pleas Judge Michael Donnelly said he learned Monday morning that prosecutors and defense attorneys had worked out a plea deal in the case. The sentence, which is the harshest sentence Donnelly said he has ever doled out, was appropriate and more humane than what Acevedo had imposed on his victims. As a part of the agreement, prosecutors will not charge Acevedo with additional crimes related to the six victims in the case. However, they could charge him in cases involving other victims. Acevedo also agreed not to profit in anyway from the crimes.