Jessica Simpson and Eric Johnson were married on the 5th July. They’re wedding was covered by People Magazine which they reportedly received $300,000 for the exclusive 27-picture spread.

Jessica tells People: “It’s all about family for us.”

Jessica asked her mother Tina, and sister to be her maids of honor. Eric’s father, Stephen, was the best man, even Ashlee’s fiancé, Evan Ross, was one of 11 groomsmen. Jessica had 12 bridesmaids. The couple had a nondenominational ceremony which was officiated by Jessica’s dad, Joe. Eric and Jessica’s children played a role in the nuptials, 2-year-old daughter Maxwell was a cute flower-girl and their year old son Ace was the ring bearer.

“Before I walked out, I kept hearing all the applause, so my kids got standing ovations!” says the new bride, 33.

The couple invited 275 guests to the San Ysidro Ranch in Montecito, California, she wore a Carolina Herrera wedding gown, a cathedral length veil, Brian Atwood shoes and Neil Lane jewelry. She walked the aisle to an 18-piece orchestra’s rendition of the score from 1998 film Great Expectations.

“I saw my gorgeous wife coming towards me and she was crying. I think my heart was exploding a little bit,” says Eric, 34, a former NFL player, who wore a charcoal gray John Varvatos tuxedo. 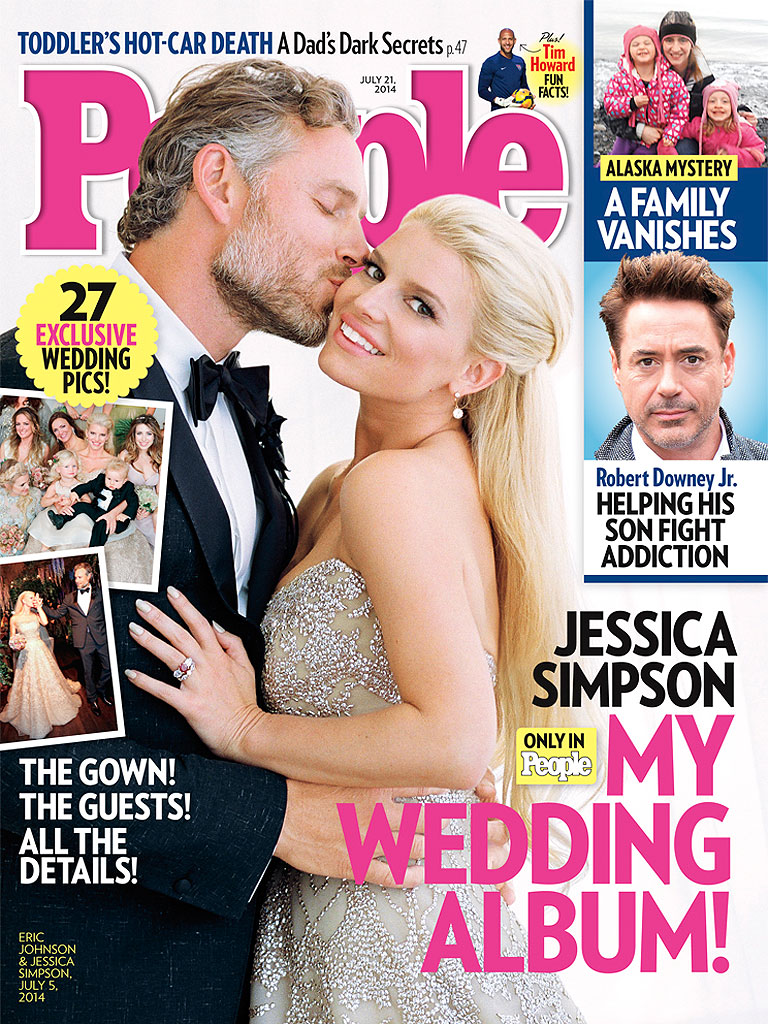 At the reception, guests dined on a four-course meal including sea bass and short ribs, then danced to a live band.

“We had seven different singers. I was very selective about the music, and everybody had the time of their lives. Eric danced with both kids!” Jessica said, adding that their children daughter Maxwell, 2, and son Ace, 1, hit the dance floor too. The party didn’t end there. Jessica slipped into a Zuhair Murad mini dress and the newlyweds hosted an afterparty that ended at 5:30 am.

“The whole weekend has been completely magical for all of us. We’ve really built such a beautiful life,” Jessica says of their fairytale wedding.

The wedding is the second marriage for both as Jessica was once married to singer Nick Lachey while Eric was married to Keri Johnson.

And for all the details about the wedding – including Simpson’s exclusive wedding album – pick up the new issue of PEOPLE, on newsstands Friday