Erica Dixon On Break Up With O’Shea Russell: “He Has 3 Kids Of His Own, I Wasn’t Ready For All That” 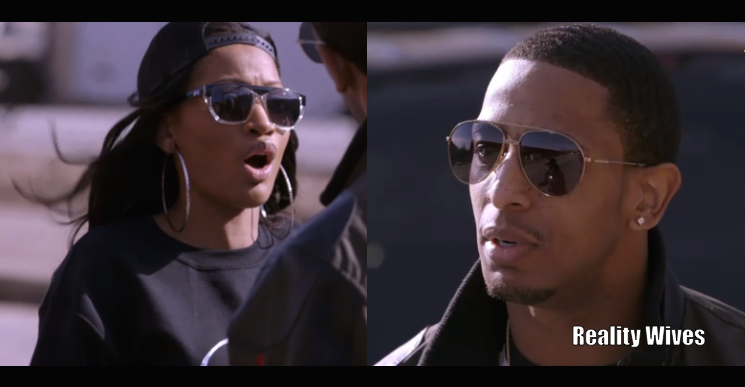 We saw Erica Dixon and her former boyfriend play out one of their break-up arguments on Love & Hip Hop Atlanta yesterday as she ran to his aid, he ran out of gas, as Erica puts it, “his a** couldn’t even make a dramatic exit, because he ran out of gas”. They had an argument in broad daylight he has issue with her meeting Lil Scrappy the father of her daughter and she with his lack of finances. Erica speaks to VH1 about their short lived romance.

VH1: So that gas money scene was a lot to watch, are you in O’Shea still together?
Erica Dixon: No me and O’Shea are not together. I think I was blinded.

We hear you say he didn’t have money, but was he a good boyfriend?
When we did meet, we were friends. What people don’t understand is regardless of what happened between us I can honestly say we’ve had our moments when he has fought for me, and he treated me like a queen. He made me feel like I was his queen – no additional women, no side relationships, no side friendships. He gave me that. That’s something that Scrappy could never give to me ever, but I am currently single.

Did you compare him to Scrappy often?
Unconsciously maybe, but not on purpose. With [O’Shea] I was happy to say he doesn’t do this, he doesn’t do that, like drink or smoke, because I feel like it can become a major factor in the relationship. Smoking and drinking can alter a lot especially what you’re thinking and I just felt like with O’Shea he was just able to be himself. He didn’t have anything altering him that made he do something he wouldn’t normally do.

It sounds like aside from the money issues, O’Shea was a good dude?
I feel like in our relationship he got very comfortable after the car accident, he broke his leg in three places and he had to get several surgeries and I was there to support him but I just feel like once he got back on his feet he didn’t like he just lost that drive and ambition to be a man and take care of his woman and his kids.

Did he pull the I forgot my wallet trick often?
It would usually be ‘I forgot my wallet,’ or ‘I don’t have any cash.’ At first you don’t really think about it, because you’re in a relationship. Then it just got to the point where it’s like let me know before hand and not after we’re out and we done had fun. Finally I got to the point where I’m like you’re my man and your supposed to be the provider. I’m thinking you have it and it’s like, ‘Oh baby you’ve got your card?’ What if I was just as broke as him what was we gonna do? Cause I wasn’t going to wash dishes.

Do you feel like the man should be the primary provider in the relationship?
Yes, I definitely feel like a man should be the provider in a relationship. Just learning from my dad, I felt my dad always provided even to this day- that’s just what [a man] does. I feel like if you fall I’m definitely there to pick you up and help put the pieces all back together. But it was like O’Shea never wanted to put it back together, it was just like everything was on me and that’s a lot. It wasn’t just O’Shea, it’s O’Shea and his three kids, and then it’s my daughter of course. I only have one child. I would’ve had four other kids to take care of, and I wasn’t ready for all that.