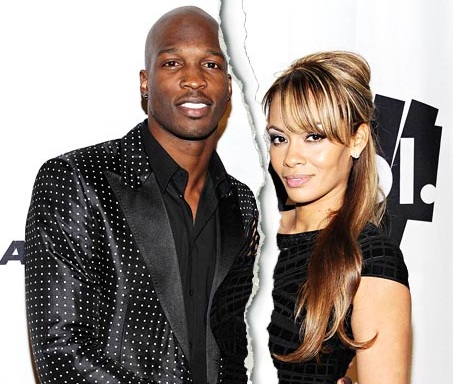 In the Evelyn & Chad saga that will not end. Allegedly Evelyn has sent a cease and desist letter to Chad to stop lying about her online – he alleges Evelyn cheated on him. That is still not reason enough to head butt her. Chad is now appearing to be extra salty after losing his wife, job and endorsements.

RT @ochocinco: @danikadbagency F-k you & your PR campaign to keep them 15 mins alive she better hope that YMCMB d-k keep her straight 4 life

@danikadbagency Let’s talks about the late night text messages and sneaking around she was doing while we together smashing CERTAIN people!!

Evelyn’s lawyer sent the letter Thursday after Chad BLASTED her on Twitter … making crude comments and accusing her of cheating.

Sources close to Evelyn tell us Chad’s Twitter allegations are 100% false she NEVER cheated and if he doesn’t stop spreading lies STAT she’ll get a restraining order.

Not only that, we’re told the prosecutor’s office overseeing Chad’s criminal domestic violence case is aware of the situation and is concerned. We broke the story Evelyn filed for divorce after Chad was arrested for allegedly headbutting her just weeks after they got hitched.

Chad is due in court Monday for a hearing on terminating his probation early. The Tweets are not gonna help his case.

Didn’t Evelyn and Chad appear in court not too long ago. What are your thoughts? Post your comments below.