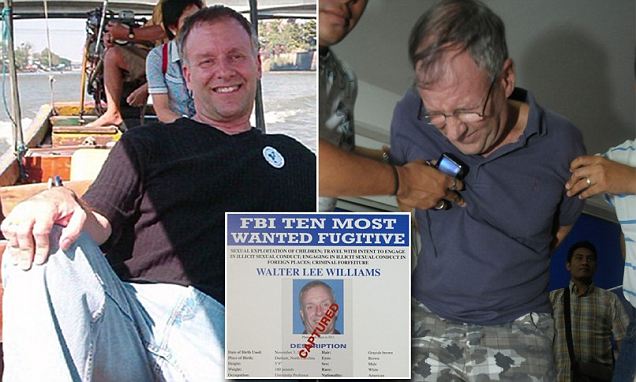 via LOS ANGELES TIMES:
A former USC professor once on the FBI’s 10 Most Wanted fugitives list pleaded guilty Friday to flying to the Philippines and having sex with several underage boys he groomed online.

As part of a plea, federal prosecutors agreed to recommend that the onetime eminent professor of gender and sexuality studies serve no more than five years in a federal prison. He also would be subject to 10 years supervision upon release and must pay $25,000 in restitution to his seven victims. Williams will be sentenced Dec. 15.

He was apprehended within a day of making the FBI’s Most Wanted List in June 2013 after he was indicted on sex crimes involving two 14-year-old boys in the Philippines. He was captured in the Mexican coastal town of Playa del Carmen after a resident recognized his photo from a newspaper.

Williams taught anthropology, gender studies and history at USC for about two decades until he quit in 2011. Under the guise of academic research on sexuality in the Southeast Asia/Pacific region, he repeatedly traveled to the area.

Federal prosecutors alleged that the author and Fulbright Award winner used those trips to have sex with underage boys. Investigators believe he has at least 10 victims across Southeast Asia, aged 9 to 17.

Williams engaged in webcam sex sessions with two boys, aged 13 and 14, in the Philippines in 2010. The next year, he traveled to the country and had sex with both boys and a 15-year-old boy, according to the plea agreement. He was 62 at the time.

While there, he also had sexual contact with three other 16-year-old boys, records show.

When he returned to Los Angeles International Airport on Feb. 11, 2011, he was “intercepted,” and child pornography was found on him. The professor fled Los Angeles a week after being interviewed by the FBI.

An attorney for USC last year provided the FBI with materials the professor donated to the ONE National Gay and Lesbian Archives that contained “lascivious visual depictions of minors,” according to the plea agreement. FBI agents also obtained similar images from Williams’ former home.