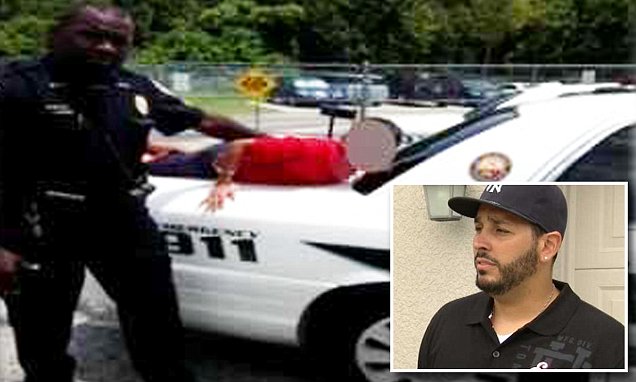 via WFTV:
A picture posted online of a 10-year-old autistic boy in Kissimmee handcuffed and placed face down on the back of a police car stirred up some controversy.

The boy’s father, Moses Maldonado, said his son was terrified after being cuffed and even got heat rash from being placed on the hot trunk of a squad car a couple of weeks ago.

But the police chief said his officers train for such a situation and he believes they did what was best for the safety of the child.

Maldonado said the incident started when he was called to Cypress Elementary because his son Ryan was acting out.

Kissimmee Police Chief Lee Massie said the child was threatening to harm himself.

“Stab himself with a pair of scissors, cut off some of his fingertips,” Massie said.

Maldonado said the whole situation got out of hand because he wasn’t allowed to calm his son down.

Ryan’s threats continued and police thought it best to commit the boy for evaluation.

“We sort of own the situation and we have to make a determination what is in the best interest of the child,” Massie said.

Massie said they laid the child on the car was because the other option was laying the child on hot pavement.

“The other officer felt it was best to place the child on the trunk where he felt the temperature was more appropriate than the ground,” Massie said.

Ryan’s father said it was a bad call on the officer’s part.

“They handcuffed him on the back of a cop car. A little 10-year-old boy,” Maldonado said.

Maldonado said his son was released in less than two hours after his evaluation.

He’s also upset with the way the school district handled the situation, not allowing him to get his son, who was not returned to school.

In a statement, the district said it handled the situation by protocol but couldn’t go into details.