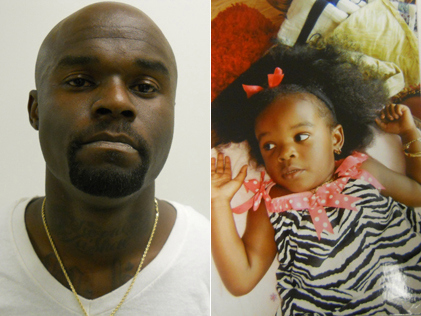 via New Jersey News 12:
The lawyer for a Monmouth County man charged with tossing his 2-year-old daughter into a creek while still strapped into her car seat says the real question for the jury is not whether he did it, but whether he was thinking clearly that night.

Arthur Morgan III, of Eatontown, is accused of weighing down the seat with a tire-changing jack so it would sink. He is charged with killing his daughter, Tierra Morgan-Glover.

Jordan Williams, assistant prosecutor, says Morgan planned to kill the toddler, “so that he could show her mother and so could show the entire world that he was in control.”

Her body was found by a group of teenagers in a creek inside Shark River Park in Wall Township. The girl’s mother reported the child missing after Morgan failed to return the girl to her mother following a trip to see a movie. An autopsy determined that the child was alive when she hit the water.

In his opening statement this morning, defense attorney Ryan Moriarty said he is not asking the jury to absolve Morgan of responsibility.

Rather, he said, they should judge whether he acted deliberately or recklessly as his life spiraled downward. “Can your ability to think clearly be affected by a lack of sleep, by losing your job, by worry, by homelessness?” asked Moriarty.

Earlier on the day of the alleged murder, the Williams says Morgan hocked jewelry to obtain cash for his getaway. Morgan fled to California following the child’s death, and was found there by a fugitive recovery task force.

The toddler’s mother, Imani Benton is expected to take the stand Thursday.

If Morgan is convicted, prosecutors say they will seek life in prison without parole, the harshest punishment available since New Jersey does not have the death penalty.