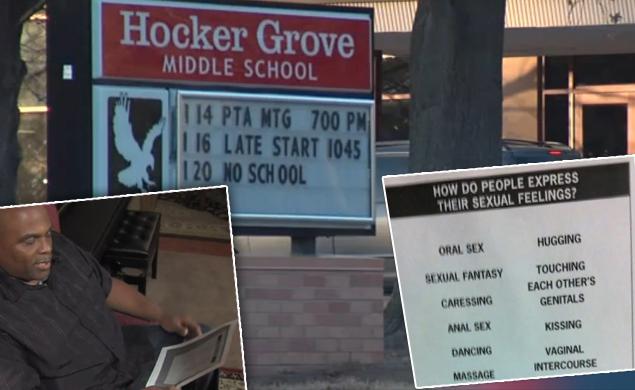 via FOX 4 KC:
A father said if his 13-year-old daughter hadn’t taken a picture of a questionable public poster and shown him, he’d never have known the content. Now that he knows, he’s not happy.

Mark Ellis says his daughter goes to Hocker Grove Middle School in the Shawnee Mission School District. She was so shocked by what she recently saw on a poster at school, that she took a picture of it home and showed her parents.

Her dad initially assumed it was a student prank, until he called the school and found it was part of the curriculum.

“Why would you put it in front of 13-year-old students?” he asked.

He thought the poster, which lists things like “oral sex” and “grinding,” might’ve been a prank until he contacted the school principal. He was told it was a teaching material. But Ellis is now concerned that what’s on this poster is being taught to his daughter in school

“It upsets me. And again, it goes back to who approved this? You know this had to pass through enough hands that someone should have said, ‘Wait a minute, these are 13-year-old kids, we do not need to be this in-depth with this sexual education type of program,’” he said.

District spokeswoman, Leigh Anne Neal, says the poster needs to be viewed in the context of a bigger curriculum, which she calls abstinence-based for students in middle school.

“The poster that you reference is actually part of our middle school health and science materials, and so it is a part of our district approved curriculum,” Neal said. “However the item is meant to be part of a lesson, and so certainly as a standalone poster without the context of a teacher-led discussion, I could see that there might be some cause for concern.”

She said that the approved curriculum is in line with what other schools around the country do as well.

“The curriculum it is a part of, it aligns with national standards around those topics, and it’s part of our curriculum in the school district,” she said.

But Ellis thinks if that’s the case, the curriculum needs to change.

“This has nothing to do with abstinence or sexual reproduction,” he said. “I would like to see that this particular portion of the curriculum is removed from the school.”

And if the curriculum doesn’t change, Ellis plans to remove his daughter from the sexual education classes.