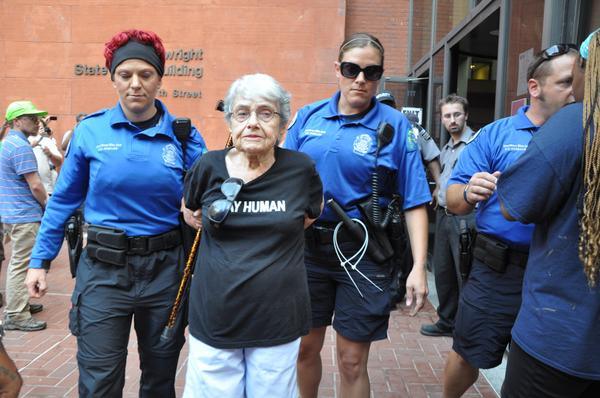 The protests in Ferguson initiated amicably, Monday night, but the tension existing between the police and the informational media intensified. Approximately 6:30 PM, those who were present at the protest reported that many journalists and photographers were being arrested, including scott Olson, a Getty photographer who has been documenting the protests all week. Rob Crilly, of The Telegraph, stated it appeared Olson was taken into custody “for not getting out of the way fast enough when ordered.”

“He was literally just across the street from the media area,” tweeted the Huffington Post’s Ryan Reilly, one of the initial journalists being arrested the previous week. He also added, “Not a good sign for media access tonight.”

Journalists, along with civilian protesters, have been put under arrest, tear-gassed and incessantly threatened by law enforcement officers throughout the protests, to the point that President Obama declared, “Here in the United States of America, police should not be bullying or arresting journalists who are just trying to do their job and report to the American people what they see on the ground.”

But for those unmoved by concerns pertaining to freedom of the press, Monday afternoon Ferguson police managed to make some egregious arrests. Eight individuals protesting outside the Wainwright Building, where Missouri’s governor has an office, were arrested for refusing to disperse. Among their ranks were a pregnant woman and a 90-year old Holocaust survivor.

“I’ve been doing this since I was a teenager. I didn’t think I would have to do it when I was ninety,” Hedy Epstein, the 90-year old survivor told The Nation as she was being led to a police van.