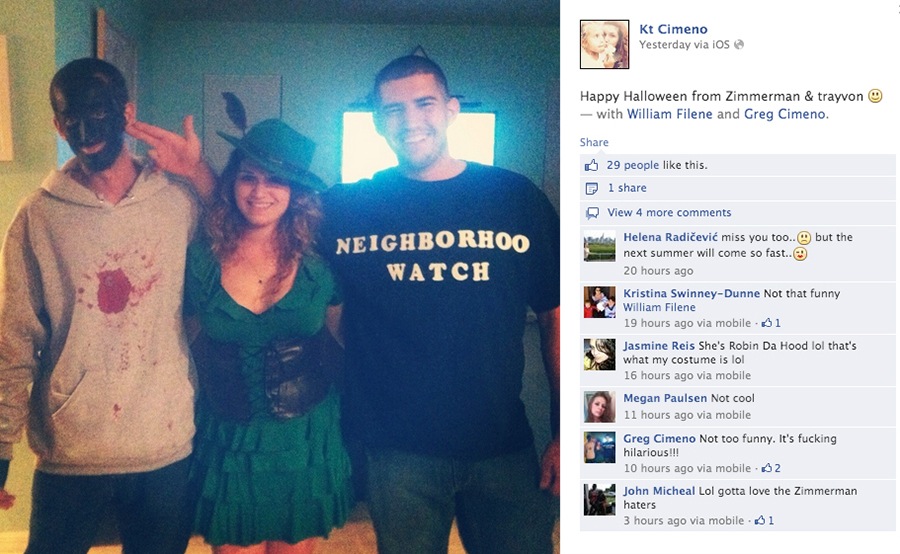 via The Smoking Gun:
A pair of Florida men decided to celebrate Halloween this year by dressing up as George Zimmerman and Trayvon Martin, complete with blackface and blood-stained hoodie.

The image of the duo (click to enlarge) was uploaded Friday to the Facebook page of Caitlin Cimeno, a Martha’s Vineyard native who captioned the photo “Happy Halloween from Zimmerman & trayvon.” Cimeno, flanked in the photo by the two men, followed those words with a smiley face emoticon. 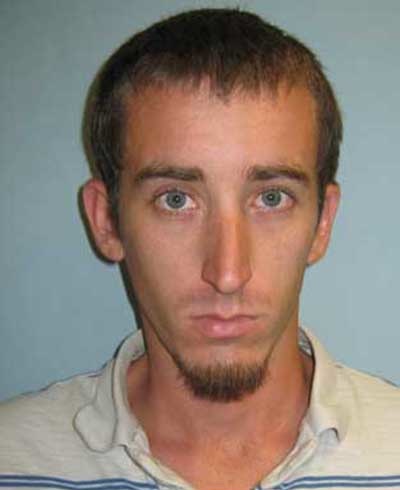 Greg Cimeno, 22, portrayed Zimmerman, complete with a “Neighborhood Watch” t-shirt. Cimeno lives in Cape Coral, Florida, where he appears to work for a carpentry firm.

William Filene, 25, dressed up as Martin, covering his face in black paint and donning a gray sweatshirt with a single bullet hole surrounded by fake blood. Filene, who also lives in Cape Coral, was arrested in June for felony auto theft. His rap sheet also included collars for loitering/prowling and failing to register an automobile.

In a plea deal, Filene copped to the auto theft charge during an August hearing in Lee County Circuit Court. He was sentenced to 18 months probation, and now has his own page on the Florida Department of Corrections web site, which includes this mug shot – right.

After Caitlin Cimeno posted the photo to her Facebook account (which she has since scrubbed), Greg Cimeno responded to comments about the image. “Anything for the laugh,” he declared. When one of Caitlin’s friends wrote that the photo was “Not too funny,” Greg replied, “Not too funny. It’s f**king hilarious!!!”

In Facebook posts last year, Cimeno referred to elderly women who wore tight pants and tube tops as “tacos,” and, when requesting that a friend contact her, she wrote, “Text ne niggs.” In August, Cimeno also posted a photo of an African American girl wearing a t-shirt reading “Black Girls Rock.” In her accompanying caption, Cimeno wrote, “First of all, sorry Hun but mommy lied to you & secondly if I was wearing a shirt that said something like the truth ‘white girls rock’ I would be stared at and called a racist cracker.”

Filene, Caitlin Cimeno, and Greg Cimeno are pictured below out of costume.