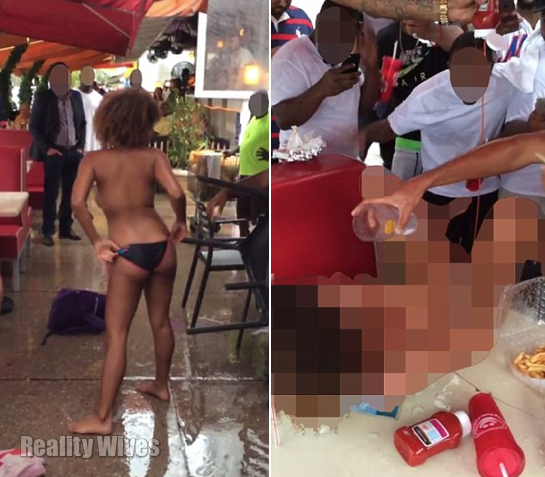 A 23-year-old woman is facing lewd and lascivious conduct charges after she stripped naked in Miami Beach at Miami Beach Johnny Rockets restaurant.

The incident occurred on the 9th October at the restaurant at 728 Ocean Drive. Video of the incident was posted on social media. Miami Beach police arrested Angelic Isabella Valle on Thursday on charges of lewd and lascivious behavior, incite to riot, indecent exposure and disorderly conduct. 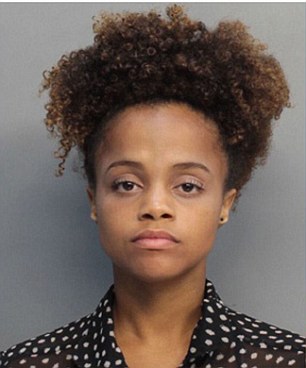 She burst into tears when she appeared in bond court Friday. Miami-Dade County Judge Mindy Glazer set her bond at $3,000. Angelic’s father also appeared in bond court, telling the judge that his daughter has a history of mental illness. Judge Glazer ordered that Valle undergo a mental evaluation. The Baker Act* has been used on Angelic 11 times.

The video, posted to World Star Hip Hop, shows the woman, dubbed ‘ketchup girl’ taking her clothes off as she’s surrounded by men.

According to an incident report, Angelic walked to the second floor of the building, Police said she came down the stairs topless and began turning over tables and chairs. A witness said Valle’s eyes were open wide, and she was laughing and breathing heavy. Angelic placed a steel chair leg into her buttocks while a group of men surrounded her outside the restaurant. Other customers ran off.

“The city of Miami Beach has allocated a lot of resources to improve the lifestyle on Ocean Drive and this is something that will not be taken lightly,” Miami Beach police spokesman Ernesto Rodriguez said.

Angelic is also accused of charging at several men in the crowd and taking off the lower part of her bikini. She then laid naked on a table and men were taking videos and pictures. One man touched her vagina.

A witness told Valle that the cops were coming and she grabbed a towel and left, and she told crowd, “Look me up on Instagram, Twitter and Facebook,” police said. She later came back with clothes on for her shoes and bag, but left again before police officers arrived. Angelic caused $420 in damage at the restaurant by breaking two tables and two glasses. 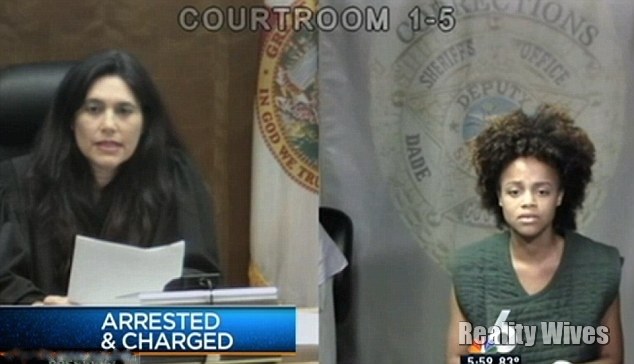 Angelic on her Facebook page Thursday afternoon: “Ya’ll saw a Jamaican woman. Listen to Vybz Kartel and he’ll explain why I did what I did.”

Vybz Kartel is a reggae artist who is serving a life sentence for murder.

Police are still searching for a man involved in the incident, who is believed to be in his 20s. He is also wanted on lewd and lascivious charges, because cellphone video shows him touching Valle’s vagina while she was lying on a table.

Anyone with information about his whereabouts is asked to call Miami-Dade Crime Stoppers at 305-471-TIPS.

Angelic’s father posted this on facebook in regards to his daughter:
Im Angelic Valle father and I am trying to get to the truth about what had happen at Johnny Rocket at Miami Beach. Miami Beach police are not telling the whole truth about the incident. For example the police and the news had put out that she poured ketchup on herself. The video shows the young man pouring the ketchup on her. My daughter had been bakeracted eleven times and it is in the police data base. The police tell us this when they bakeract her. She was bakeract on the 10 October, I called Miami Beach police on the tenth to get more information.

I was transferred to the detective division and I talked to the clerk on duty. I informed her who I am and I’m trying to get information about what had exactly had happen at Johnny Rocket. I informed her that my daughter in the video that went virtual and she was bakeract. She informed me that she will pass it on to one of the detectives when they come in. I left her my name and cell phone number for a call back. I was called later that day by a detective, he wanted to know why I wanted to know. I told him that I’m the father and I wanted the information so I know the truth. He told me that he would ask the other detectives to find out who had the case. That he or that detective who has the case would call me with the information. There was no call back so that Monday I called Miami Beach police record department to get what information I can get. I was given the case number and I was told that the case was closed.

I informed them that I was the father and my daughter was in a video dancing nude at Johnny Rocket. I was transferred to the detective division and I gave the case number to the clerk and she told me who had the case. She gave me his phone number and I called his number and left him a message. I informed him who I was and I wanted information also I left my phone number. There was no call back and she was bakeract again. She was discharged Wednesday afternoon and she was arrested Thursday night. I think that there something wrong with that. About the guy that the police is looking for that in the video. The police tell me that they was thinking about arresting him but the officer said the act was consensual.

The officers that came to arrest her that they wasn’t aware of the incident until they was issued the warrant for her arrest. Furthermore that they wasn’t aware that she been bakeracted eleven times. The police statement left out that she suffers from mental illness. That they was called more than once and shown up after Johnny Rocket manager and a coworker stop her and told her to leave before the police come to arrest her. If she was starting a riot wouldn’t the police search the beach for her to ensure that she wouldn’t start a riot some place else at Miami Beach. When the police shown up and was talking to the witnesses someone there had the incident on their phone. Why it wasn’t shown to the police then. What happen to the other people that was helping to incite the riot. My daughter is not Jamaican, I’m not Jamaican am American. The news did not investigate the story. I told the news what I’m saying here and they chose not to inform the public about the whole truth. The news even said that she poured ketchup on herself when the video shows something completely different. I would like the know what all of you think. No one want to help with getting to the truth. I am interested in what you think, I’m waiting for your responses.

* A Baker Act is a means of providing individuals with emergency services and temporary detention for mental health evaluation and treatment when required, either on a voluntary or an involuntary basis.