Four of the five fiends, all teens, accused of gang-raping an 18-year-old woman in a Brooklyn park were in police custody Sunday evening, authorities said.

Two of the boys are 15, one is 14 and one 17, according to police. The boys were being interviewed by cops after two were brought in by their mothers. The other two were apprehended.

None of the suspects had been charged early Monday, and one remained at large.

A bodega clerk on Sunday said he turned away the victim’s father when the man asked to use the store’s phone to call 911 moments after he and his daughter were set upon in the Osborn Playground in Brownsville. 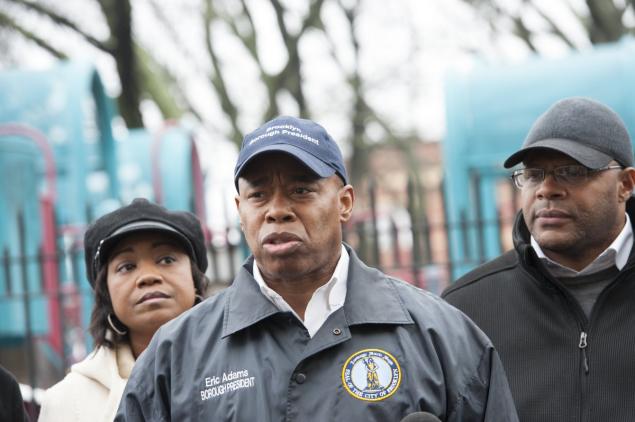 Brooklyn Borough President Eric Adams (c.) is questioning why the NYPD were so slow to respond to the report of an 18-year-old girl being raped at Osborn Playground on Thursday.

The Gaston deli staffer, who gave his name as Sammy, said he didn’t believe the man’s story.

“He looked normal. He didn’t look nervous or desperate,” the clerk recalled.

“A lot of people come here asking to use the phone. I feel bad now knowing why he needed the phone.”

The rebuffed father flagged down two cops in uniform outside, authorities said. He told them he was walking with his daughter when five suspects approached them about 9:10 p.m. Thursday. One pulled a gun and ordered the man to leave. The five creeps then raped the woman, according to cops.

“She’s OK,” the victim’s mother said. “I want them to get caught and go to jail for a long time. I feel bad, horrible.”

Police released surveillance video Saturday of the group walking into a nearby deli before the attack. “They looked happy,” a clerk at that deli told The News. “They are bad guys.”

“I am disgusted and deeply saddened by the horrific attack that took place in Brownsville Thursday evening,” Mayor de Blasio said, vowing authorities would “take every step possible” to solve and prosecute the case.

“We have been working closely with the NYPD to bring the violent sexual predators who committed this horrific gang rape to justice and will not stop until every one of them is held accountable,” said Brooklyn District Attorney Ken Thompson.

Speaking outside the 73rd Precinct stationhouse, community activist Tony Herbert said, “You cannot rape a young lady in our community and think you’re going to get away with it. I don’t care how old you are.”

Brooklyn Borough President Eric Adams questioned why it took cops two days to notify the public and community leaders about the attack. “Something is not right,” he said. “The community needs to be notified immediately when we have such a savage attack with a handgun and a rape,” he said.

He also said it wouldn’t have taken that long to garner headlines if the attack had occurred on the Upper East Side.

Cops, criticized for a slow response, said there was no delay.

“The police officers immediately responded and located the victim,” the NYPD said. “The suspects had already fled. … There were no 911 calls associated with the attack.”

Detectives were not immediately able to interview the victim, a police source said. She first needed treatment for unspecified existing medical conditions, as well as the wounds she suffered during the sadistic attack, the source said.

The woman was initially combative, refusing an EMS exam and hospital transport, the source said, adding she also tried to leave the ambulance and bit a police officer.