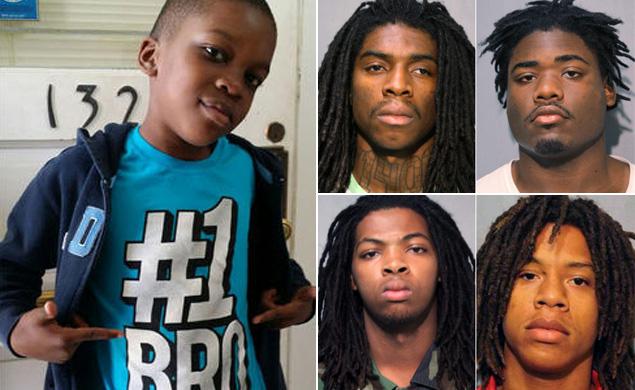 via CHICAGO TRIBUNE:
Chicago’s youngest victim lost to gun violence this year may have been targeted by four reputed gang members who thought the boy shouted a warning to rival gangbangers, Chicago police said Friday in announcing charges in the month-old slaying.

“The community refused to stay silent and provided us with vital information that culminated in the arrest of these three offenders,” McCarthy told reporters Friday afternoon at police headquarters. A fourth suspect was charged later.

Police allege the four – all members of the Sircon City faction of the Gangster Disciples street gang – were riding in two cars that afternoon looking to shoot members of the Pocket Town, a rival GD faction. In the 1200 block of East 71st Street, they spotted two men they believed were rivals, police said.

According to McCarthy, the alleged gunman, Derrick Allmon, 19, got out of one car, walked over to the other and talked to Jabari Williams, 22, who handed Allmon a handgun and told him to shoot the two.

Allmon, who police say has the word “Blessed” tattooed across his chest, had just been paroled from state prison in early August after serving about 1 1/2 years of a 3 1/2-year sentence on a weapons conviction, according to McCarthy.

“He should not have been on the street to commit this murder,” said McCarthy, apparently quibbling with state law requiring offenders convicted of certain crimes an early release from prison with good behavior. “The real kicker to this entire case is that it didn’t have to happen.”

McCarthy said a .380-caliber handgun was used in the slaying and discarded by Allmon in a sewer as he fled from the shooting scene. Investigators recovered the gun on Thursday, he said.

The gun has been linked to another homicide and a separate shooting, both this year, according to McCarthy. He said a partial trace indicated it came from Indiana, which has less restrictive gun laws than Illinois and has been a major source of guns used in crimes in Cook County. Private gun sales in Indiana don’t require background checks, a waiting period or even a record of the transaction.

An apparent break in the case came last week when Williams was picked up for unlawful weapon charges.

Williams had been spotted with a gun Tuesday but dropped it as he ran from police, McCarthy said. Officers who had prior contacts with Williams tracked him down on Wednesday, he said. As police were questioning him, Williams “made self-incriminating statements” about his involvement in Antonio’s slaying, according to his arrest report.

Hundreds of mourners turned out at Antonio’s funeral last month, remembering him as an energetic and smart boy who loved to smile, entertain and dance to Michael Jackson songs.

Affectionately called Fat Baby and Hamburger, Antonio loved to make other people laugh, his family members said. One of his favorite songs was “Still Have Joy” by singer Tye Tribbett.

The fourth-grader was on the honor roll at Hinton Elementary School and was so smart he could “sell water to a whale,” according to an obituary written by Antonio’s family and distributed at the funeral, held at the church where he was baptized and sang in choir.

His framed Washington Park peewee football No. 84 jersey stood to the left of his small, white casket.

UPDATE: Police Arrest One Of 2 Men Who Sexually Assaulted Woman Twice In An Hour