Florida Girl, 15, Who Shot Dead 16-Year-Old Brother Was Having Sex With Him In 2011; Also Abused By Uncle

Girl, 15, Who Shot Dead 16-Year-Old Brother Was Caught Having Sex With Him In 2011 and had been locked in her room for weeks with a bucket as a toilet. 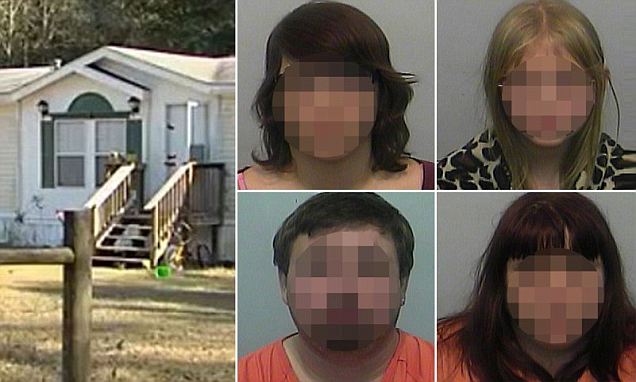 The girl (top left) had also been sexually abused for years by an uncle, according to police reports in Columbia County, Florida. In 2011, the brother and sister were also discovered having sex by their mother (bottom right). The shooting at their white one-floor home in Lake City, Florida happened on Monday. The father (bottom left), a truck driver, and his wife, left the 16-year-old boy to watch over the 15-year-old, her 11-year-old sister (top right) and their three-year-old sister. The eldest girl stole a gun from her parents’ room and shot her brother in the neck as he slept, police said. The accused had been locked for weeks at a time in her room where police found a bucket full of urine.

The 15-year-old girl who shot dead her brother, 16, suffered years of abuse, including being locked in a room for weeks at a time with only a blanket and a bucket to use the bathroom, according to police.

According to the Daily Mail, the girl had been sexually abused for years by an uncle. In 2011, the brother and sister were discovered having sex by their mother.

The shooting happened on Monday in north Florida while the father, a truck driver, and his wife, who traveled with him, left their 16-year-old son to watch over his 15, 11 and  three-year-old sister, police said. The parents left on Sunday and were due back on Tuesday.

The girls’ mother, 33, told police that they often locked the 15-year-old girl up when she misbehaved. She had recently been removed from school. The longest they kept the girl locked in her room was 20 consecutive days, the father told police.

In the room, police found only a blanket and a bucket filled with urine in the closet, allegedly a punishment because the girl was stealing and talking back.

Letters from the parents asking her why she should be let out of that room were also found in the police investigation.

‘It was learned that the 15-year-old daughter has made past attempts at ending her life but neither law enforcement nor emergency management services was notified,’ police wrote in their report.

Police documents released on Wednesday said the girl’s uncle was convicted of molesting her in 2010.

The uncle was arrested in December.

This is terrible. The mother punished the daughter, but no info is said about her son. This family is every way destroyed!

Woman Who Was ‘Trapped’ In Unlocked Closet With Human Feces, Once Escaped Mental-Illness Facility

Woman Who Was ‘Trapped’ In Unlocked Closet With Human Feces, Once Escaped Mental-Illness Facility