via FOX 4 News:
A McKinney police officer is on leave after a video was posted over the weekend showing him throwing a teenage girl to the ground and sitting on her and drawing his gun on other teens at a pool party disturbance.

The incident happened on Friday abound 7:15 p.m. at the Craig Ranch North community pool according to McKinney police and has raised questions about racial bias and police overreach.

McKinney police corporal Eric Casebolt is seen on the video taking down 15-year-old Dajerria Becton, an invited guest who says she was not involved in the fight.

“He grabbed me, twisted my arm on my back and shoved me in the grass and started pulling the back of my braids,” Becton said. “I was telling him to get off me because my back was hurting bad.”

Becton tried to get up, but Casebolt pinned her to the ground holding her down with both knees. She was eventually released to her family, who weren’t happy with how the teen was treated.

“It wasn’t right, I think his force was excessive,” said Becton’s aunt.

The teen hopes to see action from McKinney police officials.

“Him getting fired is not enough,” Becton said.

The initial call to police was about a disturbance involving several juveniles at the pool who didn’t have permission to be there and did not live in the area, according to McKinney police public information officer, Sabrina Boston.

After that, several calls were made regarding the juveniles actively fighting, Boston said. 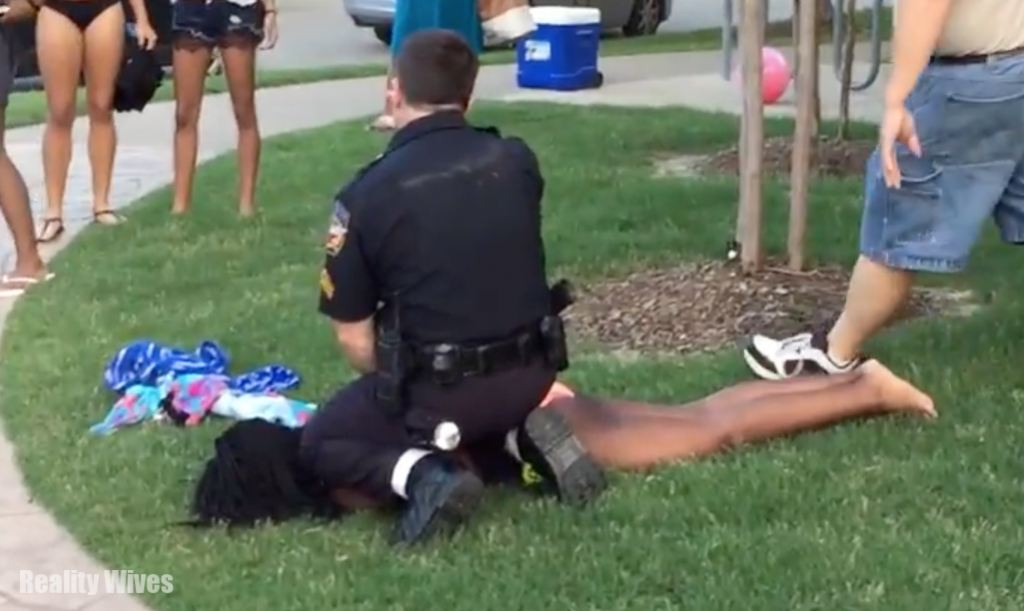 The cop has his knees in the teens neck and back.

The first officers to arrive at the pool encountered a large crowd of people who refused to follow police orders. Nine additional McKinney police units were sent to the pool and officers eventually got the situation under control, Boston said.

Some homeowners near the pool stood up for the police on Sunday.

“They were just doing the right thing when these kids were fleeing and using profanity and threatening security guards,” said one woman, who declined to be identified.

A sign at the pool on Sunday thanked McKinney police for their actions on Friday night.

McKinney Police Chief Greg Conley said in a press conference Sunday that he is committed to a complete and thorough investigation. Casebolt is on administrative leave while an investigation is completed.

“Having seen the You Tube Video I am disturbed and concerned by the incident and actions depicted in the video. Our expectation as a City Council is that our police department and other departments will act professionally and with appropriate restraint relative to the situation they are faced with.

This was one of the fights that started it all:
Allegedly a white woman stated: “black kids should go back to public housing”

Kalief Browder, Jailed For Three Years Without Trial Or Charges, As A Teen, Kills Himself At 22