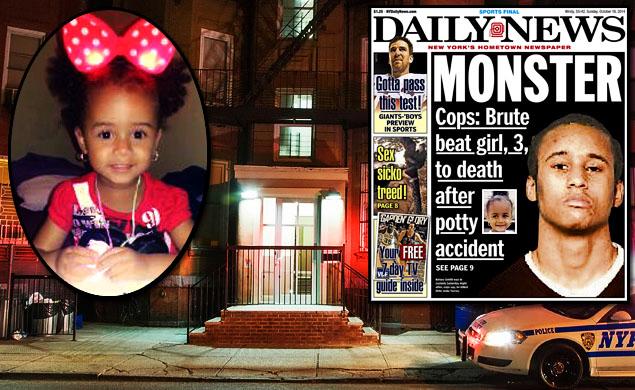 via CBS:
Police on Sunday morning were questioning a suspect after a 3-year-old girl was beaten to death and her 5-year-old brother was hospitalized at a Brooklyn apartment.

Jeida was rushed to a hospital in cardiac arrest and was pronounced dead there, fire officials said.

Her brother, Andrew Torres, is in stable condition at Wyckoff Heights Medical Center.

Neighbor Keith Best told the New York Daily News and New York Post that the boy had big bruises on his face and arms. He said the children’s mother and grandfather sobbed when they arrived home and found out what had happened.

Investigators told CBS 2 the man in custody is in a relationship with the children’s mother and was babysitting when the alleged crimes happened.

“The family seemed decent, happy, not sad or anything like that,” a man who lives on the same floor with the family told Schuck.

Authorities have not released the suspect’s name, but multiple published reports have identified him as Kelsey Smith, 20. He has not been charged.