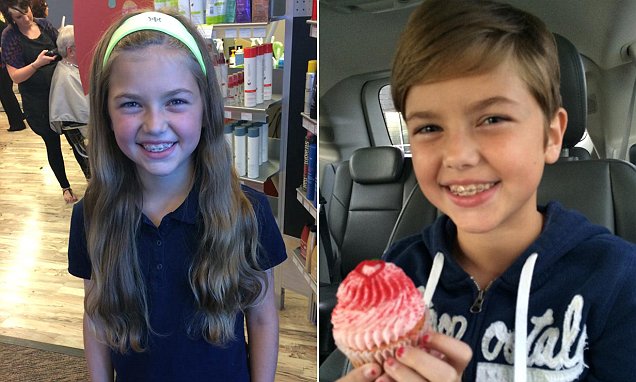 via WHIO:
A Dayton girl bullied after donating 14 inches of her hair to “Wigs for Kids” charity says her school’s administration has not done enough to stop the harassment after learning about it. News Center 7’s Natalie Jovonovich is interviewing the girl and her mother.

A young girl who donated 14 inches of her hair to “Wigs for Kids” is reporting that she has been bullied at her school, and the administration has not done enough to stop the harassment after learning about it.

Jetta Fosberg attends Pathway School of Discovery, a free public K-8 charter school in Dayton. The girl’s mother, Heidi, tells WHIO that her daughter came up with the idea of cutting her hair and wanted to make a difference.

“Of course, we were super proud,” the mother said. “We thought it was the coolest idea that she came up with on her own.”

Several weeks ago, Jetta found an organization which would take her donation and make wigs for kids with cancer.

Jetta had her hair cut and her mother took photos to share along their journey.

“And then she decided that it wasn’t quite short enough,” her mom explained. “She wanted it shorter, so we went back and they cut it shorter and I think that’s when things got worse,” she said. Children were making a lot of negative comments. “You know, about wanting to be a boy, and being ugly,” the elder Fosberg said.

She later approached Pathways principal about the bullying, but Fosberg didn’t like how the conversation turned out.

“And (he) told me that he didn’t know of any child that had ever died from words, and that we needed to toughen up and deal with it, and he would deal with it how he saw appropriate which was obviously not the response we were looking for,” she said.

Fosberg says the bullying has been going on for a couple of weeks. “Some kids go through this, far more severe, far longer than Jetta has endured, but it shouldn’t matter,” she said. “We just want them to realize that this isn’t just kids being kids and kids shouldn’t get to say things like this.”

The family has set up a Facebook page and has been overwhelmed with hundreds of responses supporting her daughter.

Fosberg said she initially thought the page was be a bit much, but then decided to try it. “Let’s see what happens,” she said, “and the response has been overwhelming. The whole experience is pretty surreal at this point,” she added. The Facebook page is getting hundreds of comments and messages a day, support shared around the world.