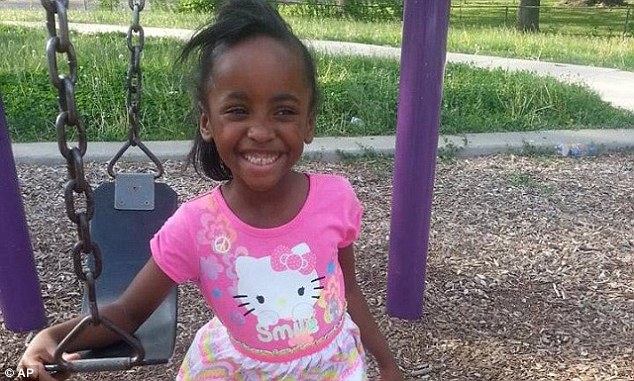 via KCTV:
A 6-year-old is dead after she was shot outside a convenience store in south Kansas City and now her family and neighbors want justice.

The little girl was later identified as Angel Hooper

Those who knew the little girl, and even strangers, gathered the next day where the violence happened and held signs to protest gun violence in Kansas City.

“Her name, Angel, it really fit her. She was just so sweet. She loved to sing and dance,” said Charity Guinn, Angel’s mother, as she held back tears.

She spoke while visiting the gas station where her daughter became the victim of a drive-by shooting Friday night.

The shooting was reported about 7:15 p.m. Friday at the 7-Eleven store at 107th Street and Blue Ridge Boulevard.

A vehicle drove by and someone inside fired shots at the store, Police Chief Darryl Forte said. Angel was hit as she was leaving it with a family friend.

The girl was rushed to the hospital where she died from her injuries.

Authorities initially said the child was 9 years old, but later determined she was 6.

Forte personally asked those responsible to turn themselves in.

“I just feel like none of this is real. She took the bullet for someone else and now she’s not here,” Guinn said.

Protestors joined the grieving mother to show their support and ask for a witness to come forward.

They also gathered to demand an end to gun violence in Kansas City.

“They get a kick out of just going around killing people for no reason,” said Marie Guinn, Angel’s grandmother.

There have been numerous reports of crime over the years at the store and corner, including robberies and fatal shootings.

Forte went to the scene Friday night. He also issued a personal message to those responsible via his Twitter account.

“Please turn yourself in. I know you have a conscience. I don’t believe the (girl) was the intended victim,” he wrote.

Others were more sad than angry, including a mother whose 7-year-old was at the convenience store when the shooting happened.

“We are going to keep her in our prayers. I’m just grateful it wasn’t my daughter, and I just feel so bad for whoever’s daughter it was,” said Mistie Wheeler, of Belton, MO.

Her family said Angel was a smart, active child who was in the gifted program at her school.

“She loved to read books, she loved math, she loved everything,” Charity Guinn said, adding that Angel’s favorite books were the Berenstain Bears series.

Now the grieving family prays that whoever killed the young girl will face justice.

The protestors at the gas station said they’ll be out there every day until police solve Angel’s murder.