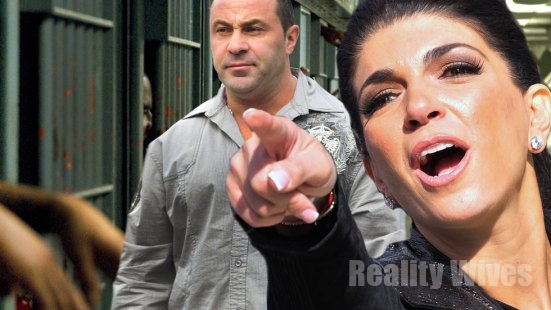 Just in time for Christmas the Giudice just had a special visit from federal officials as they raided Joe & Teresa‘s New Jersey mansion this week, seizing property to satisfy the couple’s outstanding restitution after they had failed to set-up a payment plan.

But her plea was not heard by the agents: The souce also claims, “A large amount of cash was found in the wine cellar.”

The reason for the raid came about as the Real Housewives Of New Jersey stars failed to, “submit any payment plan for the outstanding $214,000 they owe in restitution. As such, prosecutors were eager to get the property seized. The property will now be auctioned off with the money going into a trust account. If there is any money left over, it would go to paying creditors in their bankruptcy, in which they owe $14.3 million. This all could have been avoided if Teresa had simply submitted a proposed plan to pay off the restitution. Yet, Teresa chose to once again thumb her nose at the law, and was ignoring it. She is absolutely devastated that there won’t be any Christmas presents for their girls,” the insider continued.

The convicted felon will begin serving her fifteen month prison sentence on the 5th January 2015.

UPDATE: Matt Reilly, the U.S. Attorney’s Office spokesman, says his office is continuing to work with the couple to schedule repayment, and has not ordered any such seizure.

“Anyone went over there under official capacity, it would be under us.”

So if anyone raided the Giudice home it wasn’t the feds. What are your thoughts? Post your comments below.