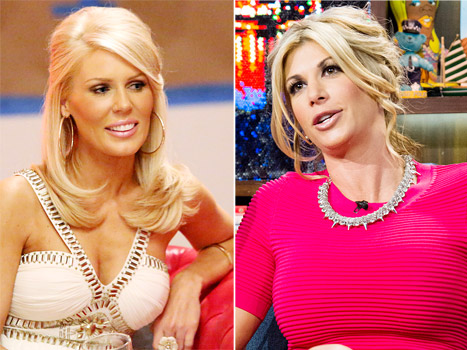 Real Housewives Of Orange County’s Gretchen Rossi and Alexis Bellino reignited some social media drama on Thursday, July 25, when Alexis started responding to several fan tweets about Rossi being a “b*tch” on the Monday, July 22, episode of the Bravo reality show. “I don’t even get [why] Gretchen was mad at you,” one viewer tweeted at Bellino.

Alexis: “It’s been 2 1/2 years & she has never said a reason. It’s because I was disposable & she chooses friends of convenience. She was my friend for 2 1/2 years & NEVER told me [she had an issue] til it was the cool thing to do”

Gretchen: “I was ready to move on! But you couldn’t even recognize your wrong doings as well or say your sorry, You weren’t all innocent in all this A. So not true. I tried to tell u in many different ways but u never listened, so I had to be a little more direct. I never had an issue with u!! I said I know your heart, but these girls don’t and sometimes u come across this way! Why do u refuse to hear what I actually said?”

Later Bravo tweeted about the reunion:
Looks like Alexis Bellino won’t be hugging it out this time. Maybe Alexis should have brough a friendship bracelet

Gretchen responded: We did hug actually, u guys just didn’t show it

Prepare for the heavily edited Orange County Reunion. What are your thoughts? Post your comments below.

More in Real Housewives Of Orange County (214 of 364 articles)