Real Housewives Of Miami’s stars Lisa and Leonard Hochstein have finally received the OK to demolish their historic mansion which was built in 1925 by Florida’s first registered architect, Walter Degarmo. It can be seen from the MacArthur Causeway.

“The City, the Designer Review Board, gave us permission. He has upheld it, in the City. [The Miami Design Preservation League] has already hinted that the next step is to take this [case] to circuit court.” – Leonard Hochstein

Memers of the MDPL have been fighting to keep the house from being demolished, saying the house should be refurbished, not leveled, because of its historic and architectural significance to South Florida, a sentiment reinforced by the group’s attorney. “This is a landmark structure, and it should be preserved,” said Kent Harrison Robbins.

The preservationists indicated the ruling left the door open to take this matter to court.

“We have the right to go forward to the courts and be able to challenge this decision.”

The Hochsteins’ mansion recently made headlines when the couple hosted a gangster-themed party at the home. Their opponents argue the residence was sturdy enough for a party, which appears to contradicts the owners’ claims that it is structurally unfit to live in.

“Well, the reason they’re giving us a hard time is because [of] the publicity. My wife has notoriety. She’s one of the Real Housewives [of Miami], and so they’re using us as a platform to get more publicity for themselves.” – Leonard Hochstein

“On the contrary, he bought one of the most valuable or most revered homes that has the highest visibility for Miami Beach on the causeway.” – Kent Harrison Robbins 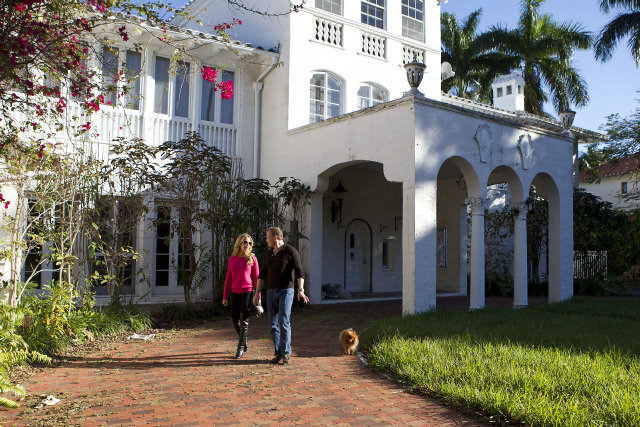 So no doubt we will see the Hochsteins, detailing their headaches of construction for the upcoming seasons. What are your thoughts? Post your comments below.
Source: WSVN

More in Real Housewives of Miami (32 of 74 articles)