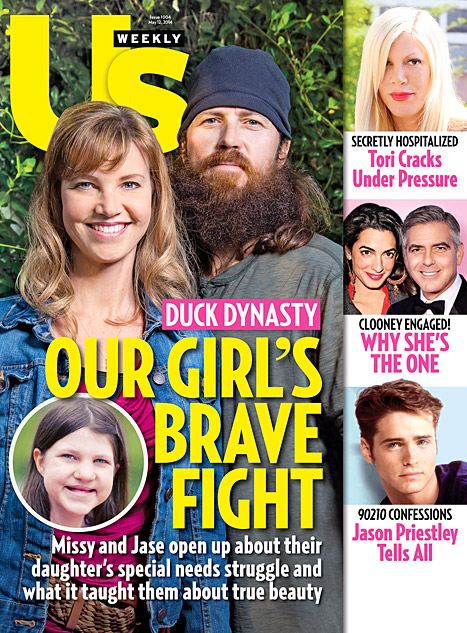 Duck Dynasty star’s Jase and Missy Robertson who have been married for 23 years, are sharing the challenges they encountered when their daughter Mia, now 10, was born with a cleft lip and palate. Their youngest child, among big brothers Reed, 18, and Cole, 16 faced more than just cosmetic problems, and has had five vital surgeries so far. In an extensive, moving interview for the new issue of Us Weekly, Jase, 44, and Missy, 43, reveal that raising a bright, gifted child with special needs has transformed and enriched their lives forever.

“It changed my perspective. I thought, here I am, worried about what she’s going to look like, while the doctors aren’t even sure she can breathe on her own. From that moment on, I stopped being so superficial,” Jase says recalling Mia’s birth. “God gives, with his special challenges, an extra measure of character. People are drawn to Mia and others like her who have perseverance and joy despite difficulties. That’s how I realized true beauty”, he continues.

Pick up the new issue of Us Weekly, on stands now, for much of our exclusive, emotional chat with the Robertsons about Mia’s journey, how she’s inspired the entire family, how the couple keeps their marriage strong and much more.