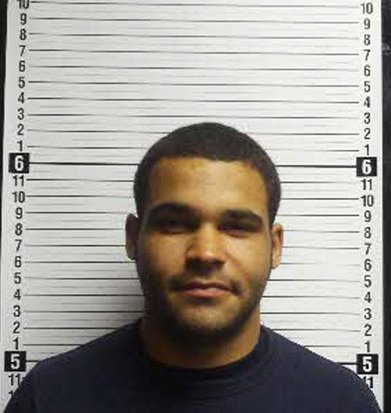 Last Halloween, Jenelle Evans’ ex boyfriend Kieffer Delp dressed as an inmate. This Halloween, Kieffer wore the real deal behind bars. Kieffer was arrested on October 31st and charged with breaking and entering, as well as two charges of driving with a revoked license. Kieffer wasn’t in his home state of New Jersey when he was arrested but rather in North Carolina. His recent tweets insinuate that he was supposed to be leaving last weekend but ultimately decided to stay a bit longer. He said:

“Im leaving nc this weekend so me n b gotta take this last chance to show twitterville that we go in when yu see it click it and listen in.”

He is currently booked at the Brunswick County Jail with a $3,100 bond. Jenelle found the arrest quite humorous and gave a remark saying: “I’m not surprised. LOL!”

Probably the most humorous part of this story is the fact that Kieffer is currently being held at the same jail where Jenelle’s estranged husband Courtland Rogers is imprisoned. Courtland is serving up to nine months for a failed drug test while on probation.

Jenelle is currently living in a two story house she purchased with her current boyfriend Nathan Griffith in North Carolina. Jenelle is reportedly getting along well with her mother and enjoying spending time with her son, Jace. Hopefully Nathan is all around better man than Courtland and Kieffer. What are your thoughts? Post your comments below.