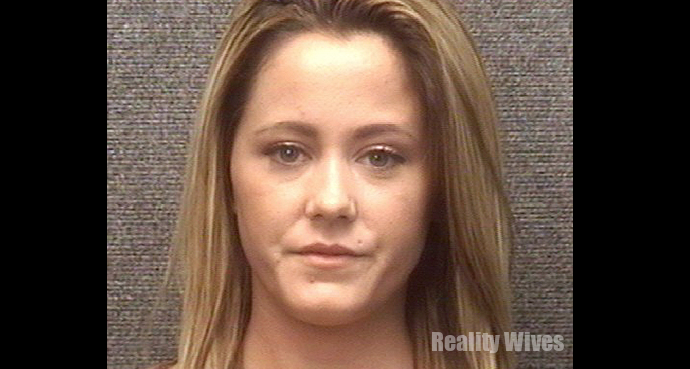 via Myrtle Beach Online:
“Teen Mom 2” personality Jenelle Evans, 23, was charged with criminal domestic violence Thursday and released on a $2,130 personal recognizance bond later that day.
Evans turned herself into Myrtle Beach police Thursday morning in connection with her former fiancé being assaulted late Tuesday, according to a police report.

Police issued arrest warrants for Evans Wednesday. She was released around 5 p.m. Thursday, surrounded by several members of the MTV film crew.

Nathan Griffith, 27, went to the Myrtle Beach Police Department at 12:30 a.m. Wednesday to report that just before 11 p.m. Tuesday Evans came to his home and assaulted him in the 2100 block of Brewster Drive, police said. He asked for a restraining order.

Griffith told officers that Evans called him from a blocked number and asked him to come outside of his apartment because she threatened to damage his vehicle, according to the report. Once outside, he said Evans, who smelled of alcohol, told him she knew where he lived and they argued.

Griffith said that Evans slapped, punched and tried to kick him down some stairs, according to the report. She also scratched and clawed his back and neck.

Officers noticed Griffith had a ripped shirt and scratches consistent with an assault, according to the report. The officer planned to charge Evans with criminal domestic violence.

Griffith managed to close his apartment door and Evans yelled that he had her cellphone and would not return their son to her, according to the report.

Judge J. Scott Long granted Evans a $2,130 personal recognizance bond and said she was not a flight risk, due to her two-year residence in Horry County. Evans asked the judge for a restraining order against Griffith.

“I would personally like it,” Evans said during the bond hearing.

Judge Long did not grant Evans’ request, instead advising her to stay away from Griffith on her own and take it up with her attorney.

Griffith does not have any prior convictions of domestic violence, but was arrested on a charge on March 4, which also involved Evans. That charge has been dismissed.

Evans was previously arrested on Feb. 25 on a charge of driving without a license, according to records at J. Reuben Long Detention Center. But a search in the Horry County Public Index does not show that charge.

Evans also was arrested on Dec. 15, 2013, and charged with breach of peace, but that charge does not show up in the index, which only lists traffic offenses such as speeding, improper start and seat belt violations.

Griffith and Evans have been featured on MTV’s reality show about young women who got pregnant and had a child. The couple have a child together.

A trial has been set for June 4 at 5 p.m., according to Myrtle Beach Municipal Court.

Teen Mom Star Jenelle Evans Wanted By Police For Beating Up Nathan Griffith, Claims Former Fiance Ran Over Her With His Truck

Teen Mom Star Jenelle Evans Wanted By Police For Beating Up Nathan Griffith, Claims Former Fiance Ran Over Her With His Truck